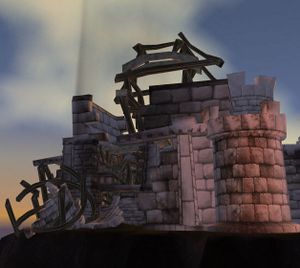 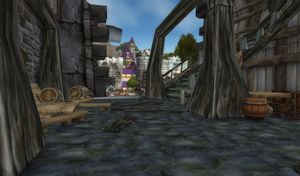 View from the Old Barracks.

The only NPCs found here aside from the occasional Stormwind Guard was Caretaker Folsom. Upon reaching the area, Janey Anship would say, "The Park's been ruined... we'll have to go another way, today. Miserable dragon!"

Before the Cataclysm, the Old Barracks was a much smaller, inaccessible, blue-roofed building that lacked towers. It was located behind the Park, and was added with Stormwind Harbor. In a sense, it was never old. After patch 7.0.3, this building was demolished and Lion's Rest was built over it.