This article is about the past version in the Caverns of Time. For the present-day one, see Hillsbrad Foothills. For other uses, see Hillsbrad (disambiguation).

Old Hillsbrad Foothills is the setting of the instance Escape from Durnholde Keep. It is one of the timeways ("wings") accessible in the Caverns of Time. The setting takes place seven years before WoW's present (i.e. two years before the events of Warcraft III), to when the future Warchief Thrall was a slave of Aedelas Blackmoore, master of Durnholde Keep. The questing involves helping Thrall escape. The instance area in question spans from Southshore (where familiar personalities of WoW present can be found) to Tarren Mill. 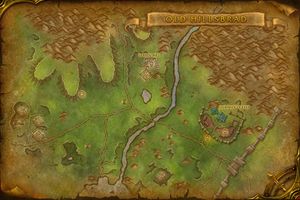 This instance, being the replica of a level 20 zone, is quite explorable alone. The actual areas where you encounter the fights and bosses of this instance are few and far between, leaving a wide-open zone full of things to explore. In fact it is encouraged that player come here alone to see all the cameos and find the interesting tidbits that lore fanatics crave, because while coming with a group for a run, they are not going to want to wait for player to explore so they can tackle content.

You enter the instance from a cave that replaces the yeti cave at Darrow Hill in the present-day Hillsbrad. Head south from there and you hit the road that goes east-west from Silverpine Forest to Arathi Highlands.

However, you cannot wander too far away from the zones included in the instance:

There are many NPCs with some connection to important events in WoW and the Warcraft universe as a whole seen here in the past, many of them later being involved with either the Scourge, the Scarlet Crusade or the Argent Dawn. They include (current locations in parentheses):

The quest NPCs include:

Tower between Tarren Mill and Southshore

A young Don Carlos was added to the instance in patch 2.4.3 for the quest

[68D] Nice Hat..., which starts from his current self in the Gadgetzan graveyard in Tanaris. His younger version can be found patrolling the road on horseback between Southshore and Tarren Mill, with his pet Guerrero. In the heroic version of the dungeon, he will drop [Don Carlos' Famous Hat], a haliscan-style hat that summons a coyote spirit vanity pet. For more details, see Don Carlos (tactics).