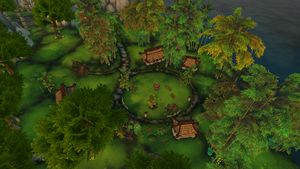 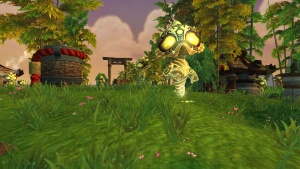 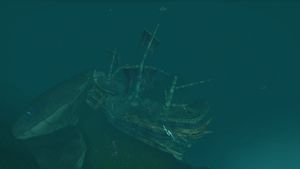 is a ruined pandaren town on the southwestern part of Timeless Isle. To the north is the Celestial Court, the Tushui Landing is to the northwest, and eastward is the Firewalkers' Path leading to the Firewalker Ruins and points northward.

The Really Skunky Beer event plays out here occasionally. Ten Skunky Brew Alementals will spawn, all with the standard alemental set of abilities. Once they have been defeated, Zhu-Gon the Sour spawns in the center of town by the well. Kill it for a decent amount of Timeless Coins.

At the dock, Fin Longpaw occasionally starts fishing. If interacted with, he will fish up the kraken Karkanos. Off the shore to the southeast is a sunken hozen ship, where there a number of cursed hozen swabbies guarding the Sunken Treasure.

When the village of Pi'jiu was attacked by the Ordon Yaungol generations ago, the villagers bravely erected a keg in the center of the village. The following morning, after the celebration had died down, the still-drunken Yaungol blearily agreed to a peace treaty.[1]

During the Really Skunky Beer event