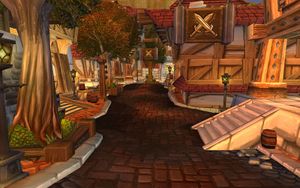 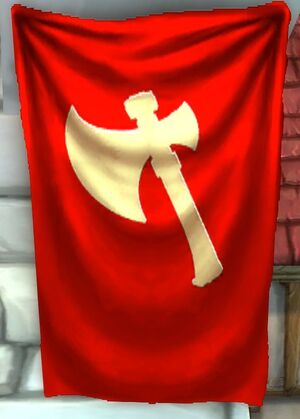 One of the banners marking the entrance to Old Town.

Old Town is Stormwind City's most older section, and many parts of it still predate the reconstruction of the city and its razing by the orcs during the events of the First War. It is also the location of the city's most renowned taverns, such as the Pig and Whistle Tavern. Crime is also a constant problem in this run-down area. It's a rustic, down-trodden place, but many Stormwind citizens feel it has its own unique charm. It is the residential area for most of the poor folk of the city.

The warriors and rogues of Stormwind are trained in the barracks, which include the Alliance Command Center, the officer's barracks (that sell all the PvP gear for the alliance), open training grounds with training dummies, and the headquarters of the SI:7, the Stormwind Alliance organization that deals with intelligence which is ran by Master Mathias Shaw.

Some don't know of him, but there is an NPC named Kendor Kabonka upstairs in the "Pig and Whistle", where you can buy plenty of cooking recipes. Good for those who either didn't train cooking for whatever reason or for those who haven't been able to find certain recipes.

After the Cataclysm, the entire section containing the Command Center and SI:7 headquarters received a redesign, with a building portion being knocked out to open onto a wooded training area and stables.