Omen of Clarity is a passive level 48 Feral and Restoration druid ability. For Feral, your autoattacks to give a small chance to make your next

[Cat Form] ability cost no energy. For Restoration, the periodic healing from

[Lifebloom] gives a 4% chance to make your next 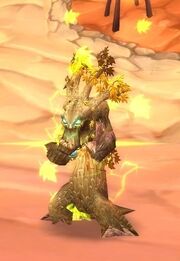 Tree of Life with Omen of Clarity, before it was passive.

At the time of release, Omen of Clarity was a talent available in the balance tree which applied a weapon buff to the druid's melee weapon. The clearcasting state gave mana-free spells only (not rage or energy-free feral abilities) and could only be triggered by the druid meleeing in caster form (not by attacks in bear or cat form, and moonkin form did not yet exist).

The original balance tree was exceptionally unpopular among druids, and Omen of Clarity with its requirement for significant caster-form melee was an obscure talent in that tree.

Patch 1.8 radically changed the talent by:

This transitioned an obscure balance spell into a very potent feral combat spell.