[Chestplate of the Ruby Champion], or

[Will of the Red Dragonflight]

Destroy 30 Wastes Scavengers and recover the Scythe of Antiok. Return to Alexstrasza the Life-Binder at Wyrmrest Temple should you complete this task.

Use this beacon to signal a Wyrmrest vanquisher. Climb upon its back and fly north to Galakrond's Rest. Once there, command the dragon to destroy the Scourge scavengers that work to unearth Galakrond. Once the area has been cleansed, fly to the Wicked Coil, overlooking Galakrond's Rest, to destroy Grand Necrolord Antiok and recover the scythe that he uses to control the wyrms.

Do this and return to Queen Alexstrasza for a hero's reward!

<Name>, beware the rotting storm giants that wander the area!

Destroy the Scourge at Galakrond's Rest before it is too late!

I knew that you would return, <name>. You have served the Wyrmrest Accord and saved your people from certain death. Let it be known to all and let it be recorded for all posterity!

If the drake's abilities aren't working, log out, disable all addons, log back in and try again. Stick close (but not too close) to the ghouls to make sure they die. 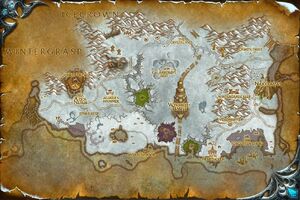 , which is on the north edge of Galakrond's Rest. Get close to the ground, target the giant, hit 1, spam 2 until 1's cooldown comes back up, then hit 1 again. By that point, Thiassi should die. Antiok will hop off and desummon your dragon, so just kill him normally now that he's no longer immune. The scythe is an object that appears after Antiok dies, so you do not have to be the one who kills him to loot it.

The drake can be used anywhere in the Dragon Wastes, so if you wait to turn in the quest you get a flying mount for a good portion of the area.