Onyxia's Lair is a level 80 raid dungeon located in the Wyrmbog, Dustwallow Marsh. It is home to Onyxia, the brood mother of the black dragonflight.

Onyxia is the daughter of the mighty Black Aspect, Deathwing, and sister of the scheming Nefarian, Lord of Blackrock Spire. Whereas her father favors brute force, and her brother creates twisted abominations to carry out his will, Onyxia prefers subtle manipulation, and delights in meddling in the political affairs of mortals, using her charm and power to influence such delicate matters between the different races to her own ends. Some believe that Onyxia has even assumed an alias once used by her father - the title of the royal House Prestor. Most recently, she very nearly succeeded in destroying the political structure of Stormwind in the guise of Katrana Prestor, before being unmasked by Marshal Windsor and fleeing to her lair: a fiery cave below the Dragonmurk, a dismal swamp located within Dustwallow Marsh. There she is guarded by her kin, the remaining members of the insidious black dragonflight.[4]

King Varian Wrynn and a group of Alliance heroes were able to assault her lair and slay Onyxia. Onyxia was decapitated and her head was brought back to Stormwind City to be hung from the gates. After her death, Broll Bearmantle summoned roots from the ground to seal the lair's entrance and to kill her unhatched progeny.[5] 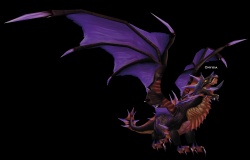 The only boss in Onyxia's Lair.

The level 80 version of Onyxia drops headpieces with similar names and models as the Tier 2 ones the original level 60 version had. (The actual Tier 2 headpieces now drop off Nefarian in Blackwing Lair). She also drops a new version of

[Quel'Serrar] since the questline for the original version has been removed from the game. All of these items have been upgraded to reflect Onyxia's new status as a Tier 9-level boss. There is also an extremely fast mount named Brood of Onyxia that drops off her. Item levels range between 232 (10-player mode) and 245 (25-player mode).