This article is about the in-game boss. For character biography, see Onyxia. For the original encounter at level 60, see Onyxia (Classic).

Onyxia is a level ?? black dragon boss in Onyxia's Lair. 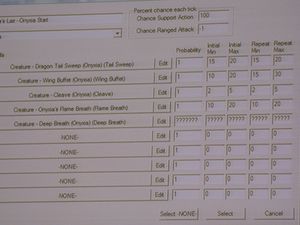 Onyxia takes off at 65%, has no threat table, cannot be attacked from melee, and uses the following abilities:

Onyxia lands at 40% HP. She regains all her phase one abilities and gains some additional abilities. 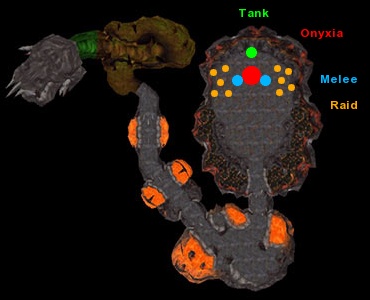 This is (still) a very simple encounter overall. For strategy videos of both the 10-man and 25-man encounter, look below the loot table on this page.

The tank should run slightly ahead of the rest of the raid and grab Onyxia, quickly turning her away from the raid and then backing off to the Northern wall, where the tank will position themselves with their back to the wall to minimise the effect of the knockback from Wing Buffet. Only the tank should be in front of Onyxia, to minimize damage from fire breath and cleaving. During phase one, the only damage to the raid should be upon the tank. Ranged DPS and healers need to stay to either side of her, fairly far back. Melee DPS need to stay to either side of her, just within range (which is wider than it looks). If melee DPS is too close to her head, they will be killed by Cleave; if they're too close to her tail, they will be tail swiped, possibly into the whelps, usually resulting in a wipe.

Phase one ends when Onyxia is reduced to 65% health.

During this phase, Onyxia takes to the air and moves randomly around the room, casting Fireball on raid members. There are three main things to watch out for:

During this phase of the encounter ranged DPS should be focused on bringing Onyxia down to 40% to start phase 3, although they must interrupt this to AoE the packs of whelps. Melee dps should focus on killing the Onyxian Lair Guards.

For raids looking to complete the

[Many Whelps! Handle It! (25 player)] achievements, the instant her feet leave the ground, send one player down each entrance of the egg cave. Each player should look to spawn about 25 eggs, then turn around and exit the cave without doing anything that causes aggro. Note that the 40 whelps she normally spawns will still spawn, so it will take some high-level coordination to AoE down roughly 90 whelps. There is no indication that players have spawned enough whelps until Onyxia dies, so don't be afraid to pop more than 50 eggs.

Onyxia will land on the Southern side of the room and immediately cast Bellowing Roar, causing the raid to run in fear for the next 3 seconds. Finish off whatever adds remain while the tank positions Onyxia. Note that, unlike the level 60 encounter, the tank will have retained aggro on Onyxia from phase 1. It's advisable to ensure that the tank is unaffected by the initial fear, so that Onyxia can be positioned correctly (fear ward, berserker rage, tremor totem).

Phase 3 is essentially the same as phase one aside from periodic fears, some raid damage from eruption and occasional whelp spawns which are not too dangerous.

Onyxia no longer drops threat between phases 1 and 3, and she is no longer immune to fire effects and abilities.Wing buffet no longer lowers aggro. Deep Breath is cast more often, and the cast time has been increased. Onyxian Lair Guards now spawn in phase 2, and melee can no longer hit Onyxia in phase 2. Lava eruptions happen during the Bellowing Roar fear, not just after it.

Onyxia is easily soloable in 10-player mode. Just nuke her in phase one (to 65%), dragging her to the northern end of the room. Once she hits 65% health, keep nuking her, as she'll run to the south end of the room to take off. Ideally, get her beneath 40% health so she'll land automatically, which requires taking off 1.2M/5.6M health in 10/25-player mode. If she's not beneath 40% health before she takes off, DoT her up and use whatever ranged abilities are available.

The Onyxian Whelps will spawn no matter what, so gather them up and AoE them down. They have 63K/189K health each. If Onyxia is in phase 2 for longer than 15 seconds, she'll summon an Onyxian Lair Guard with 189K/630K health that will need to be killed as well. Repeat guards are summoned every 30 seconds thereafter, and if she's up for longer than 90 seconds, she'll summon another wave of whelps.

Once she lands to start phase 3, clean up any remaining adds, then finish her off.

In addition to the items in the tables below, Onyxia is guaranteed to drop the following each time she is killed:

Very rarely, she may also drop the

Two of the new achievements are named after famous sentences taken from the Onyxia Wipe Animation. "She Deep Breaths More" is a nod to the common forum complaint that, after every patch, bugs or intentional changes result in Onyxia deep breathing more often.

Intro
How fortuitous. Usually, I must leave my lair in order to feed.

Phase 2 (at 65%)
This meaningless exertion bores me. I'll incinerate you all from above!

Kite her from her lair
You seek to lure me from my clutch? You shall pay for your insolence!