Oondasta is a devilsaur world boss found on the Isle of Giants, north of Kun-Lai Summit, on Pandaria.

Oondasta is no tap and respawns every 15 minutes.

Found in a place that has been lost in time, the great devilsaur lord Oondasta has been outfitted for battle with weaponry and armor by the Zandalari, and awaits players brave enough (or foolhardy enough) to seek him out on the mysterious Isle of Giants found in the seas north of Kun-Lai Summit.

As the war against Lei Shen's island citadel began, Alliance and Horde scouts made an effort to intercept missives between the major Zandalari camps. One such exchange seemed to revolve around an unfamiliar Zandalari word, always surrounded by terms of conquest and power: Oondasta. Somewhere in Pandaria, the Zandalari Beast Ward raises their mighty beasts as engines of war, and is putting the finishing touches on this Loa-infused monstrosity. The exact location, however, remains unknown... 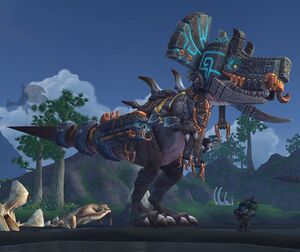 Oondasta in the Isle of Giants.

To start out, all members of the raid must be behind Oondasta or the 180-degree Frill Blast will one-shot all but tanks using a defensive cooldown. Oondasta has a huge hitbox, so no players should be stacked up on top of one another, or the Spitfire Beam will chain and do a decent chunk of damage to a large part of the raid. The stacking Crush means tanks will have to swap, but as Oondasta is immune to taunts via Alpha Male, tanks will have to swap the old-fashioned way, or the stacking Crush will kill them before the Frill Blast does.

All spell-casters must pay attention to the Piercing Roar cast and not let it lock a school for 10 seconds, which is particularly annoying for healers. As the fight drags out, Oondasta will gain a stacking damage buff in the form of Growing Fury, which affects all of its abilities. After about 15 stacks, even Piercing Roar will start to one-shot members of the raid.

As of Patch 5.3, the graveyard has been moved up to Oondasta's area, thus the previous strategies of either dragging Oondasta down to the beach or resorting to a 90-second graveyard zerg are no longer necessary. Players choosing to release and run back to their corpse (now a 20-second run) will still have to contend with the resurrection timer, however. 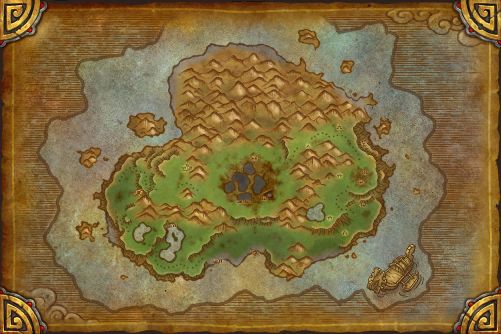 Players involved in a successful Oondasta kill will have a chance of looting one of the following items, and can use a

[Mogu Rune of Fate] for an additional chance. Should players not win loot, they will receive a

[Shiny Pile of Refuse] instead. Players can only receive loot or use a bonus roll for Oondasta once a week.[1]

Oondasta appears as a legendary card in the Rastakhan's Rumble expansion for Hearthstone. His flavor text reads: "Adorning devilsaurs with armor and feathers is a respected job in troll culture, although it has a high turnover rate."