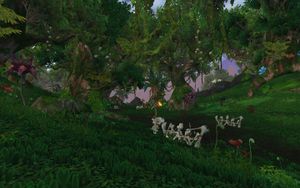 Oostan is large area of pygmy territory in the western part of Lost Peak's caldera, on the Lost Isles. Within the area there are three villages: Nord in the north, Sor in the west, and Ost in the south. It is from here that the pygmy witch doctors—Gaahl, Malmo, and Teloch—turn the goblin survivors into zombies and send them to attack the Town-In-A-Box.

Oostan and its surroundings are completely destroyed by the volcano's eruption.

The names of the three villages could possibly be derived from Norwegian directional words. Nord means north, sør means south (Oostan Sor lies south of Oostan Nord), and øst means east (Oostan Ost lies east of both villages). This would fit well with the name of the area as Oostan could be related to the English town Ulverston, which is also known as Oostan, and which name is derived from Old Norse.