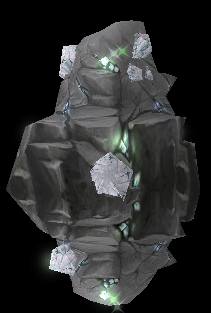 [Star Ruby]. Truesilver Ore can be smelted into Truesilver Bars by miners.

Interestingly, Truesilver has been noted to be a material that is both incredibly light and stronger than steel.[1]

The magical and mysterious truesilver is greatly sought for its arcane properties, especially for its use in armor treatments. By the rigorous application of dweomers, armorers boast that this armor treatment "can give mortals a taste of godhood". While armorers are not immune to hyperbole, there’s little doubt this treatment produces extraordinary transformations. Only heavy armor may receive the truesilver treatment.[2]

Truesilver Veins do not have their own spawn points but spawn randomly on Mithril Veins, Thorium Veins or Rich Thorium Veins. Truesilver Deposits appear in many zones across Azeroth. Some frequently mined sources for Truesilver Ore include the Burning Steppes, Un'Goro Crater and Stromgarde Keep, along the cliffs by the sea.