[75] Operation: Gnomeregan.
For the achievement, see

Operation: Gnomeregan was the name of Gelbin Mekkatorque's plan for the retaking of the surface of Gnomeregan. The event started on September 7, 2010 on US servers and September 8, 2010 on EU servers, and ended October 25, 2010 with Patch 4.0.1. Only players between level 75 and 80 were able to serve during the operation, but lower level players helped by motivating other gnomes or by turning in items.

The quests leading up to the assault are described here.

Gelbin Mekkatorque is known as much for his technical brilliance as he is for his just leadership of the gnomes. In addition to being elected high tinker, the most prominent rank in gnomish society, Gelbin proved himself to be an inventor without equal by leading the construction of the Deeprun Tram, which links Stormwind and Ironforge. Yet all of the high tinker's achievements have been overshadowed by one catastrophic event that occurred under his rule: the fall of Gnomeregan.

Around the time of the Third War, an ancient menace known as the troggs surfaced in Gnomeregan from the depths of Azeroth. This barbaric race, thought to have been unintentionally released during the Uldaman excavation, crushed the gnomes' defenses and became entrenched in the lower sections of the city. Gelbin, for all his genius, was at a loss for a way to eradicate the savage invaders until his chief advisor, Mekgineer Sicco Thermaplugg, proposed that they inundate Gnomeregan with toxic radiation.

Confident in Thermaplugg's radical plan, Mekkatorque gave the order to irradiate the city. This bold move worked at first: toxic radiation spread throughout Gnomeregan and momentarily stopped the troggs' incursion. Soon, however, it was evident that the radiation was killing gnomes as well as troggs. In the end, nearly 80 percent of the gnomish race died, and many of those who survived were mutated into deranged leper gnomes. To add to the tragedy, the troggs then resumed their assault on the city.

Mekkatorque and the healthy survivors evacuated Gnomeregan and were taken in by the dwarves of neighboring Ironforge, but Thermaplugg disappeared. The high tinker later learned troubling news that his former advisor had seized control of the toxic gnomish city and instated himself as its twisted overlord. Much to Mekkatorque's shock, he also discovered that Thermaplugg had secretly desired the office of high tinker and might have been previously aware of or even complicit in the trogg invasion.

The immense loss of life at Gnomeregan weighed heavy on Mekkatorque's shoulders, and in his fury he ordered the death of Thermaplugg. A band of heroes took up the mission and returned with a tale of victory, but after analyzing the claim, Mekkatorque realized that the mechanized overlord defeated in the depths of the city was likely nothing more than a cleverly engineered facsimile of Thermaplugg.

Aware that defeating his nemesis would require a more robust approach, Mekkatorque labored over strategies to retake his city. His tireless brainstorming recently paid off with the formulation of Operation: Gnomeregan, a brilliant multi-phased assault plan devised to liberate the gnomish capital and bring the real Thermaplugg to justice. With the operation set to begin, resourceful gnomes such as "Doc" Cogspin, Captain Tread Sparknozzle, and Drill Sergeant Steamcrank have been overseeing preparations and fine-tuning new technology that will be vital to the offensive.

Meanwhile, Mekkatorque has begun rounding up all able-bodied gnomes to join in the attack, and his call to arms has also been heard by other members of the Alliance. The gnomes' techno-savvy has been vital in past conflicts, and many Alliance heroes are likely to join the offensive to recapture the extraordinary inventions within the fallen city. For Mekkatorque, however, his plan goes beyond just reacquiring lost technology. The retaking of Gnomeregan will determine his legacy in history, either as the high tinker who lost the gnomes' beloved capital, or the one who reestablished it as the center of innovation on Azeroth.

Operation: Gnomeregan is about to get underway.[1] 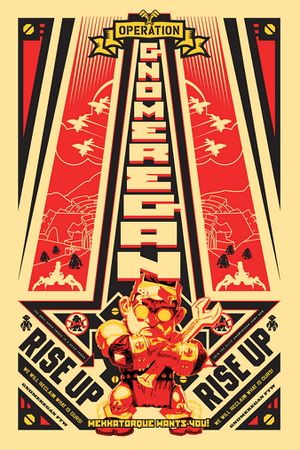 On April 8th, 2010, Blizzard released a "press release" from High Tinker Mekkatorque that reads much like a recruiting poster complete with a download-able poster even ending with the following quote at the bottom "Operation: Gnomeregan is coming, and the Gnomeregan Exiles want YOU!"

After rumors spread throughout Kharanos and Ironforge about Mekgineer Thermaplugg preparing his irradiated soldiers to meet the growing gnomish clamoring for the reclamation of their once-great city, High Tinker Mekkatorque today exclaimed Operation: Gnomeregan to be imminent, describing his former ally Thermaplugg's irradiation of the beloved city as "a date which will live in a proportionate rate of increase in impropriety!" Speaking to a small conglomerate of various Alliance representatives, Mekkatorque pointed out that the time to strike is now. After all, Thermaplugg has eluded death for years to keep his reign over Gnomeregan; and with the fall of the Lich King, the last great threat to the citizens of Azeroth, the chance of any cataclysmic event taking place in the foreseeable future is "less than 12.7%[2]," Mekkatorque's leading combat medical advisor Doc Cogspin purported.

With confirmation of the impending attack upon Gnomeregan comes your chance to get involved. Victory begins in Tinker Town! As great citizens of Azeroth and proud members of the Alliance, High Tinker Mekkatorque shall call upon you to serve his gnomes in exile. After all, the best offense is a good... offense! Whether you're a hero of your people and slayer of the most dreadful Burning Legion and Scourge creatures, or an up-and-coming adventurer, you can start by motivating your gnome brethren to unite behind the Gnomeregan banner. All it takes is a bit of finesse with the

[Motivate-a-Tron] to call gnomes to action. The device works flawlessly! After all, what good would it be if such a powerful invention ended up turning Tinker Town citizens into little critters? Almost no good!

With fresh new recruits at your side, Mekkatorque will send you to Steelgrill's Depot, the staging grounds for the Gnomeregan offensive, where you'll meet Captain Sparknozzle. Do as he commands by completing Drill Sergeant Steamcrank's training and testing the operative capabilities of the brand new Mechano-Tanks before they're shipped to the front lines. Seizing Gnomeregan is more important than your fear of heights, which will be put to the test as you're summoned by Pilot Muzzlesprock to neutralize the irradiation vents bruising the Gnomeregan horizon in a critical

Every man, woman, and child is called to serve! Even if you're just barely getting your bearings on the art of combat in places like Kharanos or Elwynn Forest, you can do your part by helping fuel the war effort. A few dead boars leads to a few more comfortable siege pilot seats, and surely you can handle such a crucial step in the preparation for facing Thermaplugg's poisoned followers. You can even help master wordsmith Toby Zeigear in writing High Tinker Mekkatorque's battle cry. The road to success will be paved by you, and you'll be rewarded as such with a commendation of Gnomeregan Pride, allowing you to temporarily don the uniform of the elite Gnomeregan Infantry.

Thermaplugg is no trifling gnome, though his arrogance will be his undoing! Even still, he is undoubtedly preparing never-before-seen forces to meet this assault. Only the most battle-hardened heroes of the Alliance (levels 75-80) will be called to serve during Operation: Gnomeregan. When Mekkatorque determines the operation is ready to get underway, you must speak with him on the front lines before following him on a full assault of the enemy air field, surface command post, and into the tunnels of lower Gnomeregan. It is said that Thermaplugg has employed the use of so-called "Brag"-bots to spread his propaganda and hubris. Be not afraid of his words, fellow members of the Alliance. Stick with Mekkatorque and Doc Cogspin to ensure your safety. After all, you wouldn't want to lose the grace of Cogspin's Surgeon General's Warding. Gnomeregan must be cleansed of irradiation and the troggs it was intended to repel. It is time to reclaim this modern marvel and earn your very own Gnomeregan Overcloak, a testament to your historic bravery in the face of madness!

In April 2010, it was clarified that only the "surface of Gnomeregan" would be recaptured and that the actual instanced dungeon would remain in the game. Furthermore, the newly freed region would serve as the new starting point for any Gnome characters created afterwards.[4]

As the event begins, all Alliance characters are sent a letter by the High Tinker himself:

As a proud member of the Alliance, duty compels you to journey to Ironforge with haste and submit yourself to the will of High Tinker Mekkatorque, King of Gnomes.*

The end of our exile draws nigh - Operation: Gnomeregan is about to begin!**

* Lawyerbot 2000 informs me that I actually possess no legal authority whatsoever - over gnomes or otherwise - but still, you have to admit that sounded impressive!

** Seriously, please come help out if you can. Many thanks!

[Whirring Bronze Gizmo] and some Fresh Spring Water. Cogspin, toss me that

[Dirty Trogg Cloth] and a