Opulence is the fourth boss in the Battle of Dazar'alor raid. In this encounter, the Alliance faces off against the enchanted treasures of the Zandalari Empire.

This encounter is part of the Battle of Dazar'alor raid where Horde characters are transformed into soldiers of the Alliance.

Long ago, King Dazar had his golden treasury enchanted so that would rise against anyone except its rightful owner. Many an unsuspecting thief has been slain by the very riches they coveted, serving as an important lesson to those who would steal from the throne. 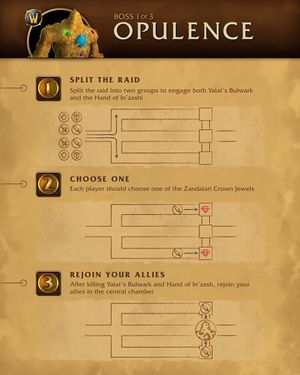 Overview of tactics for the Opulence fight.

In order to survive the battle with the Opulence, players must split their raid into two groups and battle through trapped hallways guarded by ancient Zandalari constructs to loot the Zandalari Crown Jewels, using their magical power to overcome the Guardian's overwhelming strength.

If the Alliance has any hope of defeating Opulence, they must use the enchanted Zandalari Crown Jewels to aid in their assault. Each player may take only one of the jewels.

Stage One: Raiding the Vault

The Alliance must avoid traps and defeat the guardians of the Crown Jewels to gain their power.

Aggro Opulence
Trade Prince Gallywix yells: What are you doing? Don't hurt it!

Death
Trade Prince Gallywix yells: You... MONSTERS! How could you destroy something so glorious?! It's true what Sylvanas says... you Alliance goons ain't got no souls!