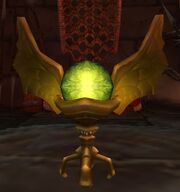 It was only usable if one had completed the quest

[60D] Blackhand's Command, the attunement quest for Blackwing Lair. With the revamp of Upper Blackrock Spire in patch 6.0.2, the quest was removed and so was the attunement requirement.

The orb's markings match the brand on your hand.

<Place my hand on the orb.>

Not completed
A large humanoid hand print is embedded on the surface of the orb. Despite what appears to be constant manipulation and handling, the orb remains unmarred.