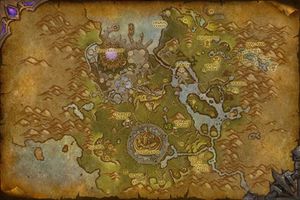 Retrieve an Orb of Dominion from the Den of Secrets in Shadowmoon Valley.

Gul'dan and his Shadow Council have their hooks embedded deep into Garona's soul. We've tried traditional magical methods and they haven't helped her. It's time to get unorthodox.

<Khadgar cracks his knuckles, his eyes flashing with a disturbing eagerness.>

I've just learned of a Shadow Council holdout hidden beneath the Draenei city of Elodor. They are using an Orb of Dominion to brainwash spies. Quickly! Assault the cave and recover the orb for me. We will turn this dark magic to our advantage.

The orb! Did you find it?

I have invited the Shadow Council into my house. Let's get this over with before this thing can cause any mischief.

Cordana Felsong says: Watch yourself, champion. The Shadow Council will prey on your doubts and weaknesses.

Take a flight path to Elodor (for Alliance characters) or Exile's Rise (for Horde characters). The mouth of the Den of Secrets is located at [54.7, 14.9]

at the northeast end of the Umbrafen, not far from Ba'ruun. After getting close, a Dark Enforcer tries to scare the adventurer off with a threat:

Dark Enforcer says: Turn around, <class>. You'll find nothing but suffering in here.

Not one to heed threats, the player auto-accepts the quest

[100] The Shadow War, which calls for the death of 15 Shadow Council members in the cave. Enter the cave and take the south fork to reach the main room of the Den of Secrets, where Dentarg is using the Orb of Dominion to attempt to mind-control three draenei villagers of Elodor.

Dentarg says: Give yourselves to the shadow. None can resist the master.

Finish Dentarg off and loot the orb. Don't forget to kill enough Shadow Council orcs to hit the quota before leaving.

Cordana Felsong says: I can feel the dark energies surrounding you. What IS that thing?