Adds 5 bonus fire damage to the attack of a Hero when carried. The Hero's attacks also become ranged when attacking air and do splash damage to nearby enemy units in a radius of 14.
The damage bonus is of the Spell damage type, so it will do 30% less damage to heroes.

These can be bought from Arcane Vaults in The Frozen Throne.

Arthas receives one in Blackrock & Roll, chapter 2 of the Warcraft III human campaign, The Scourge of Lordaeron, after delivering The Heart of Searinox to Feranor Steeltoe.

Grom Hellscream finds one in The Hunter of Shadows, chapter 5 of the orc campaign, The Invasion of Kalimdor.

Thrall finds one in The Oracle, chapter 7 of that campaign.

Tyrande and Maiev can find one in Shards of the Alliance, chapter 6 of the Frozen Throne sentinels campaign, Terror of the Tides. 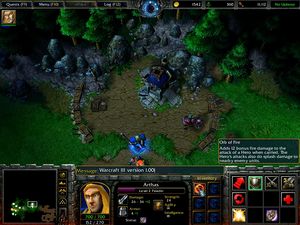 In Reign of Chaos the tooltip said: Adds 5 bonus fire damage to the attacks of a Hero when carried. The Hero's attacks also do splash damage to nearby enemy units.

In an earlier version of Warcraft III: Reign of Chaos, it gave you 12 bonus fire damage.