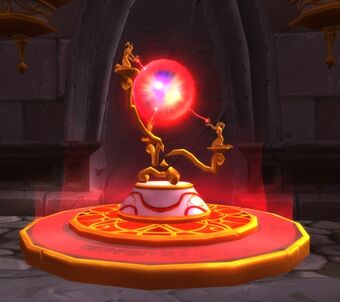 An Orb of Translocation.

An Orb of Translocation is a swirling red orb of blood elven manufacture, a device used to teleport oneself either short or far distances within the world. They are common in Quel'Thalas.

There are five known connected pairs of orbs in Azeroth and Outland. The first and most-often used connects Sunfury Spire in Silvermoon City to the Ruins of Lordaeron in the Undercity, which were implemented to allow blood elf players in Quel'Thalas to travel to the "mainlands" without having to venture through the Eastern Plaguelands. Alliance players cannot use this orb. This is probably to prevent easy raids on Silvermoon City.

The orbs are also used in single buildings to connect from the ground floor to the top. Such locations include Duskwither Spire in Eversong Woods, Falcon Watch in Hellfire Peninsula, the Sun's Reach Sanctum on the Isle of Quel'Danas, and the Kael'thas-controlled Firewing Point in Terokkar Forest.

There is also an orb behind Kael'thas Sunstrider, the final boss of Magisters' Terrace, that translocates players to Vindicator Xayann at the Shattered Sun Staging Area.