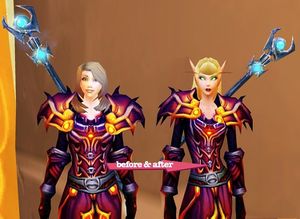 Human female before and after

The Orb of the Sin'dorei is a toy that temporarily disguises the user as a Blood Elf. The gender of the disguise matches that of the user, and some other character attributes, such as hairstyle and skin color, cause consistent variations in the Blood Elf model used. Additionally, the user's own gear is still displayed. In contrast, the

[Orb of Deception]'s model is affected by the user's gender, weapon, and race, but does not reflect character customizations and armor.