Orbaz Bloodbane, nicknamed the "Hand of Suffering", is a death knight in the service of the Scourge.

He was first encountered in Acherus: The Ebon Hold in the Scarlet Enclave. After

[55] Victory At Death's Breach!, he is relocated to the Scarlet Tavern. Upon discovering that there was a courier coming from Hearthglen (in

[55] How To Win Friends And Influence Enemies), Orbaz, Thassarian, and Koltira Deathweaver were sent behind enemy lines to locate him. He appears to be apathetic to the plight of any comrade who gets him/herself captured and/or killed and still maintains old hatreds, as was the case when Koltira was captured and held in the Scarlet Hold. After the Battle for Light's Hope Chapel in

[55] The Light of Dawn, Orbaz flees when the Scourge is defeated, thus remaining in Scourge service while Darion Mograine and the others (including the players who took part) are freed from the Lich King.

At some point, Orbaz killed Dahlia Suntouch at the Ruby Dragonshrine.[1]

Orbaz was apparently intended to lead a new order of death knights, the Host of Suffering, based out of Malykriss: The Vile Hold, a replacement for Acherus being built out of saronite. Seeking to derail the plans surrounding the new necropolis, the Knights of the Ebon Blade send out willing allies to disrupt saronite mining operations, destroy infrastructure, and slay the intended leaders of the new order, ending with Bloodbane himself in 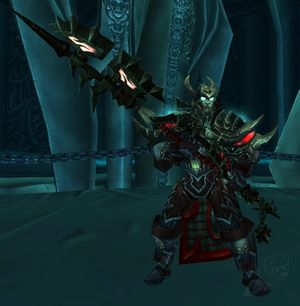 Main article: The Fate of Bloodbane#Notes

Originally, Orbaz Bloodbane could be found in the Ruby Dragonshrine in Dragonblight, but he was replaced by Duke Vallenhal sometime during the alpha.

It is possible that he is related to Baron Bloodbane.