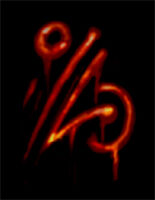 The main form of the Orcish language used by all orc tribes on Draenor was known as common Orcish.[1] Separate clans had variations of dialect that differed so much that orcs could not understand each other unless they spoke the common tongue.[2] Written using runes, Orcish is regarded by non-speakers as an ugly, guttural language.[3][4] Jaina Proudmoore is able to differentiate between pictographs from an old version of the orc language.[5]

Here are a few common orcish phrases and words, for which the translations have been officially confirmed by Blizzard:

Note that many orc locations are directly named for prominent orcs, including Bladefist Bay, Durotar, Garadar, Grommash Hold, Kargath, Kargathia Keep, Orgrimmar, Hordemar City and Thrallmar. Further, it can be noted that -ar or -mar seems to be a frequent suffix to denote a place named for another orc.

This is the list of words created by the in-game language parser for the Orcish language and is listed as language number one (word range 1-100) in the Language text file.

The following appear in the "Orcish / Common Dictionary" found in eastern Dalaran.

The following names are offered as suggestions when creating characters on the character creation screen. Note that this list represents a sample of the many possible suggestions.

In the Warcraft II cinematics, orcs randomly say words in orcish like "Moka", "titoo", "glode". These words, however, have never been heard in another Blizzard game and have never been translated.

Orcish (or Orc) is a coarser language than Common, and many words lack the subtlety of Common. Orcs rely on context, repetition and volume to add emphasis or meaning.[8] There are many orc dialects, examples include one spoken by the majority of the Horde, and another by orcs living near Durnholde.[49]

Orcish is written using a combination of Common alphabet and runes.[citation needed]

Most orcish names derive from words in their language that have some complex meaning or hidden significance to their families. Typically, this is the name of a favorite thing or relative. Family names don't exist; most orcs have last names related to some great deed of heroism or honor. However, in the case of truly incredible deeds, an orc might take on the last name of his father to ensure that the chronicle of that terrific deed lives on.[51] The concept of honor is seen in every level of orc society, even in their naming practices. An orc’s first name is given early in life, often derived from a family name or the name of a great hero. The tribe bestows the second name after the orc reaches maturity, this name based upon some great deed. Such a practice gives rise to surnames such as Doomhammer, Elfkicker, Foe-ender, Skullsplitter, Thumper, and the like. This second name may be changed if a new one seems more appropriate.[52]

Orcish surnames are usually derived from great acts or merits a previous ancestor was lauded for,[citation needed]  but some exceptional orcs earn their own surnames (Kilrogg Deadeye, Kargath Bladefist), and many prefer to use the names of their fathers (Thrall, Son of Durotan). Only the family leader can hold an eponymous title (For example, there can only be one Doomhammer or Deadeye at a time), and the rest of the clan identify themselves through their line of birth.

Two types of orc names appear to have arisen: two syllables separated by an apostrophe and a simple name shortened from a longer one. The two-syllable ones- Gul'dan, Drak'Thul, Dal'Rend - appear to have initially been only used for spellcaster, but was later exported (Gar'Thok was a grunt). The second type was highly cultural; only those with powers over the warrior could use their full name, such as Shamans and chieftains, or the orc's personal religious leader. For example, Brox's full name was Broxigar, a term which he allowed only Tyrande and Krasus to use. Grom Hellscream's full name was Grommash, which Mannoroth used to address him as a demonstration that Hellscream was his. This is very inconsistent, however, most of the known orcish names (such as Durotan, Orgrim, Nazgrel, Kargath) are never documented being used in short forms.

However, there are many other 3-letter combinations that produce the translation "kek", and "lol" isn't really a word in the English language, anyway.
Kek's origin is from Starcraft's online service. The original version of the game did not support full Korean language, so the closest a Korean player could get to "Hahaha" in Korean was "Kekeke". [1]

"Orc" as a term defining language, has an apparent connection to DnD derived generic languages, which apparently can be found in DnD rule books.

To a degree, phonetically some of the words resemble Tolkien's Black Speech, which makes sense since that language was presumably the foundational influence for the sound of this one. It is, however, generally somewhat less guttural and (to use Tolkien's own adjective for the Black Speech) uncouth.

It also doesn't seem to really be an actual language as such; Blizzard apparently originally invented a few words with an "Orcish" sound to use as acknowledgment phrases when units were clicked on in the earlier Warcraft games, and thus to create consistency, these words were brought over to WoW. The translated vocabulary, however, is not large, and there is no real formal grammar. The "Orcish" that can be seen apparently being spoken by players in-game is the result of a hash table created by Blizzard, (as mentioned above) and the words produced by it are intentionally meaningless gibberish.

The examples of Orcish we've seen indicate what the phonetic inventory of the language might include, but we have nearly no evidence of the structure of the syntax or grammar. It may be possible to assume that adjectives come before nouns, as in English and other Germanic languages. As seen in the primer above, "Grommash" translates to "giant's heart". Thus we might say that "grom" (giant's) is an adjective modifying "mash" (heart). The word "Grombolar," meaning "bowels of the giant", seems to follow this pattern as well. Of course, if this is actually a possessive clause, or a compound word, then the speculation that Orcish follows an adjective-noun word order could be erroneous.