— Words of induction to the Order,[1] found in the Tome of Silver and Ash

The Order of Embers (or the Ember Order) is an elite organization of Kul Tiran champions tracing its origins back to the first colonization of Drustvar by the humans nearly three millennia ago. Founded to fight the Drust threat, the order has been recently revived to fight the Heartsbane Coven of witches. Members of the Order, known as Inquisitors, are highly trained individuals using a variety of techniques and weapons, and armed with an in-depth knowledge of Drust and witch magic. The Inquisitors of the order have been successful in containing this influence, and securing the region from ruin during the Drust incursion.

Around 2,700 years ago, humans from Gilneas arrived on an island that they would later call Kul Tiras.[2] The indigenous Drust people enacted raids against the humans' fledgling hamlets, seeking to protect their territories.[3] Initially, the humans tried to pursue peace with the Drust, though only a few of the natives tolerated their new neighbors, and war became inevitable. The Drust themselves glorified the slaughter, attacking unarmed civilians.[4]

Drust assaults carried on for many years until the ancestors of House Waycrest launched their own crusade against the attackers. Though the Waycrests were hearty folk, the unique death magic of the Drust[5] was strong, and war shifted against the humans.[3] In desperation, the Waycrest family oversaw research into their enemies' magic, forming the Order of Embers to use the knowledge gained against the Drust.[6] New tactics were developed when their scholars began to uncover weaknesses in the Drust's magic, such as the use of silver weapons[7] and a complex alchemical solution called Liquid Fire to burn away the Drust,[8] gave the Order an edge in the fight. All of their knowledge was compiled into a treatise on weapons and tactics that could be used to defeat the barbarians, entitled the

In the end, the Kul Tirans triumphed over the Drust and drove them from the land which was soon settled. Unbeknownst to the humans, however, the Drust leader Gorak Tul had not been fully vanquished and plotted his vengeance for centuries to come. The Order of Embers, its main purpose having been fulfilled, would begin to fade over the subsequent years, but its legacy was secured from unwanted hands. The Tome of Silver and Ash was secured deep inside the drust ruins of Gol Var, and a cottage with a secret door was built by House Waycrest in front of the cave entrance to conceal it. Knowledge of the Order, the tome and the cottage would be passed down through Lord Arom Waycrest's family since then. 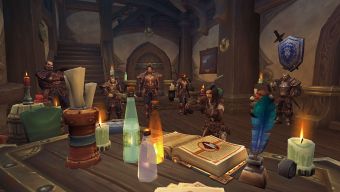 The Order of Embers is reformed

Thousands of years after the first defeat of the Drust, Gorak Tul's influence began to grow in Drustvar once more, spread by the Heartsbane Coven of powerful witches. House Waycrest itself, having sided with Gorak Tul, seized control of much of the region, including the city of Corlain.

To fight the resurgent threat, Lucille Waycrest set out to reform the Order of Embers, thought by many to be merely a legend. After having found the Tome of Silver and Ash, she drew new Inquisitors from the ranks of the Waycrest Guard, in addition to a champion of the Alliance, and refounded the order at Arom's Stand. The Inquisitors immediately began a campaign to drive back the Heartsbane. Much of the Order's ancient knowledge was successfully used against the new threat. A victory over the witches in Falconhurst led by Inquisitor Joan Cleardawn gained the aid of Master Ashton, who began recreating Liquid Fire. From there, the fight was then taken to the Coven and their wicker army in the Crimson Forest, where their forces were decimated.[10][11][12] They also managed to stop Gorak Tul's first attempt at re-entering the physical world, at Gol Inath.

At the same time, the rest of the Order focused on liberating Corlain, and secured Watchman's Rise as a forward base.[13] Inquisitor Notley used his falcon to scout the surrounding areas and identify important targets. The blacksmith Angus Ballaster was soon rescued from the witches, becoming the Order's main smith. As in times past, silver weapons were forged to effectively battle the Coven, the materials being taken from Bleak Hills Mine to the east. Caged falcons were also saved from being corrupted in the Corlain Aviary, while the traitorous Captain Goodspeed and his troops were brought to justice.[14][15][16][17][18]

During her search, Inquisitor Mace also discovered that Harris Hocking's farm was holding back the Heartsbane because the presence of his onion field somehow disrupted Drust magic, adding another weapon to the Order's arsenal.[19] Merely striking corrupted falcons with a pungent onion was enough to kill them instantly.[20]

With much of Corlain secured, the Inquisitors turned their efforts on Upper Corlain. Using cannons at the entryway, Inquisitor Sterntide broke down the barrier blocking access to the district.[21] Together, the Inquisitors cut a path and pushed all the way to Waycrest Manor, the center of the Coven's power. There, they encountered the "Mother" and leader of the witches, revealed to be Meredith Waycrest, and her undead husband, Lord Arthur Waycrest. After being forced to slay their former commander, Marshal Everit Reade, the Order stormed the manor on Lucille's orders and put an end to the Mother and her closest disciples.[22]

After a short moment of reprieve, the Inquisitors had to face their final challenge deep underneath the house itself, which turned out to have been built on an ancient Drust edifice. There, Gorak Tul, made his entrance into the physical world. After a climactic battle, the Order repelled the Drust king, but it was revealed that it was only a vessel that they defeated. Gorak Tul still dwelled within the Blighted Lands, and would eventually return.[23] Even so, the Drust's hold on Drustvar was broken, and the Heartsbane Coven dismantled.

An ancient Kul Tiran order resurrected to battle the threat of witchcraft, the Order of Embers fights with knowledge guiding their blades.