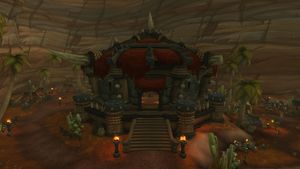 The Orgrimmar Embassy is a district in Orgrimmar that serves as a meeting point for the leadership of the Horde and as headquarters for many of its allied races. It was established after the fall of the Burning Legion in the Argus Campaign, and can be found west of the Valley of Strength, where the Goblin Slums were located, replacing the goblins' oil drilling operations. 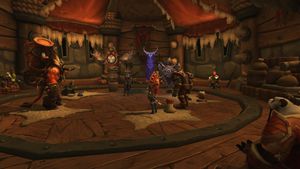 The embassy's interior in patch 8.0.1, with the leaders of the Horde gathered

Much of the Horde's efforts in the lead up to the Fourth War, notably involving the recruitment of new allied races, is based from this location. The door to the embassy is located at coordinates [39, 80.] This is to the left and up the hill from the main gate. A small engineering shop and an engineering trainer can also be found next to the embassy.

During Varok Saurfang's rebellion, Jastor Gallywix came to the goblin camp near the building and ordered Overworked Underlings to burn Piles of Misfiled Paperwork and Stacks of Totally Legal Paperwork. 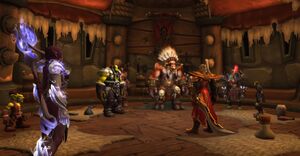 The birth of the Horde Council.

In the aftermath of N'Zoth's death and the end of the Fourth War, the leaders of the Horde gathered within the Orgrimmar Embassy where they received the terms for an armistice from the Grand Alliance, putting the Fourth War on hold indefinitely, if not permanently. With that matter settled, Lor'themar Theron addressed the absence of a Warchief. Despite support for Thrall to take the mantle on again, he refused, citing that he had promised Varok Saurfang he would not take on the role once more. Instead, he brought up the idea of the Warchief being necessary, instead bringing in the belief that a change was needed for the Horde's leadership. With this, the Horde Council was created.[1]

When an allied race is unlocked, NPCs of their faction appear around the embassy. Some of them offer services and include profession trainers.