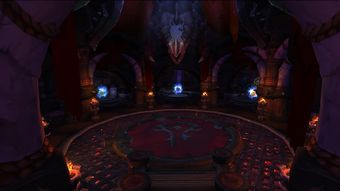 Pathfinder's Den (or Orgrimmar Portal Room) is a portal room found within the Gates of Orgrimmar. From here, the mages of Orgrimmar and their allies, maintain portals to a number of different areas on Azeroth, Outland, and Draenor.

During Saurfang's rebellion, the entrances to Orgrimmar became surrounded by his allies, and the city was locked down on Sylvanas' orders, causing Pathfinder's Den to be closed down as well. Several adventurers demanded to enter the room, but Stoki Wonderwand didn't allow them and directed them to the Warchief instead. When Saurfang challenged Sylvanas to mak'gora, she killed him and abandoned the Horde. The portal room was opened, but Stoki remained distrustful of the former banshee loyalists, promptly refusing them to use her portals. With Orgrimmar without Warchief, the den was patrolled by First Arcanist Thalyssra who calmed any quarrels here, explaining Stoki the importance of forgiveness. Lady Liadrin and her squad of Blood Knights started her patrol from here as well.

Note: Near the Shattrath portal is a Thrallmar Mage that will take you to the Dark Portal in the Blasted Lands, if eligible.

Additional portals to Cataclysm specific areas are available in the Western Earthshrine.[1] Portals for allied race starting areas are still in front of the Orgrimmar Embassy.

With patch 8.2.0, a portal to the Caverns of Time was added.