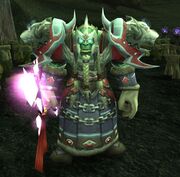 [70G5] The Cipher of Damnation

Oronok Torn-heart is a level 70 general goods and drink vendor located at Oronok's Farm in the contested territory of Shadowmoon Valley. A shaman in the past and later a user of shadow magic who served as a cruel lieutenant of Gul'dan, he is now a simple farmer who makes a living from his domesticated boars.

Oronok's story in his own words

Upon completing his first two quests, Oronok tells his story. It seems he was not always a farmer, but rather an eyewitness to — and to an extent a participant in — a dark chapter of the orcish race's history.

Very well. The words you seek have a name, <name>. They are known as the Cipher of Damnation: The words uttered by Gul'dan himself to shatter this land. The very spell that severed the last remaining ties the orcs had with the elements of Draenor.
<Oronok nods>
Aye, it is the cipher that you must reconstruct and ultimately the words of the cipher thay you must call.

How do I find the cipher?

The Cipher of Damnation was kept in Gul'dan's private quarters inside Karabor for twenty years. Ah, that's right, you have no idea what Karabor is, do you?
The Black Temple...
Aye, now home to Illidan Stormrage.
When Illidan took control of the Black Temple, he discovered the Cipher. He recognised that the damage to this world had already been done but thought it wise to keep the cipher secure for later use.

How do you know all this?

When you stand at the Altar of Damnation and see the spirits of the damned, kneeling in prayer, what you do not see is me, standing next to Gul'dan.
<Oronok nods>
I told you that I was a lot of things, did i not? One of those 'things' was a lieutenant of Gul'dan.
I have done many terrible things in my life. I have slaughtered man, woman and child alike. Danced in the blood of innocent draenei... yet...
<Oronok chokes on his words>

Yet what? What is it, Oronok?

I will never forget that day, <race>. Never. Even though I had long since abandoned shamanism in favor of shadow magic, I felt the cut. A sense of loss so profound... I could not explain it to you with mere words.
When the tie to the elements was severed, all orcs on Draenor changed. If there was ever any doubt in the power of the shadows, it was washed away with the cresting of the molten lava over the shattered earth.

A wave of sickness rushed through me. After the ritual was over, I ran home to my children. I gathered what belongings I could carry in my arms and left with my boys. We ran to the hills and hid. There really was no other option...
Not a day goes by that I don't think of the cut. It has taken 20 years to reconnect with the elements. It has taken 20 years for the elements to even begin to heal.

So what of the cipher now? And your boys?

As I said, the cipher was found by Illidan when he took over the Black Temple. He divided the tome into three parts and charged their care to his minions.
My boys... My boys are grown now. When I got word of what Illidan had done with the cipher, I sent my boys to recover the pieces.
You must find my boys, <name>. You must find them and recover the Cipher of Damnation.

I will find your boys and the cipher, Oronok.