For the tribe of tol'vir, see Orsis tribe. 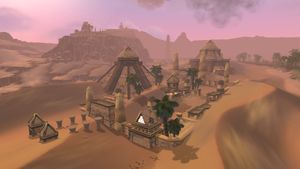 Orsis is a tol'vir city located in west-central Uldum. When the tol'vir were afflicted by the Curse of Flesh, as many creations of the Titans were, they were offered to swear allegiance to the evil dragon Deathwing in order to regain their stone skin. But the people of Orsis refused... and so Deathwing's ally, the Elemental Lord Al'Akir, buried Orsis beneath the sands in a great windstorm as punishment and to serve as a warning to the other tribes.

King Phaoris of Ramkahen, who leads the tol'vir who oppose Deathwing and Al'Akir, sends any adventurers who are willing to give aid to the survivors of Orsis, buried beneath the choking sands. Powerful air elementals, minions of the Windlord, also inhabit the region making sure the tol'vir stay buried while they search for The Scepter of Orsis. The Orsis tribe has been bound by oath to protect this scepter from evil.[1]

In the League of Explorers adventure of Hearthstone, the Temple of Orsis serves as the first wing of the adventure.