For the Outland zone and the ship's general history, see Oshu'gun. 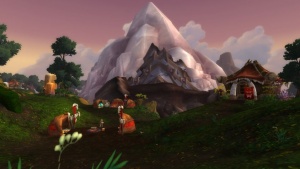 Oshu'gun, true name the Genedar, is the crashed dimensional ship that brought the draenei to Draenor and is now the sacred mountain where the spirits of orc ancestors dwell.

A naaru aboard the Genedar, K'ara, entered the naaru Void state in the midst of the crash and was jettisoned out of the ship, hanging in the sky above Draenor and coming to be known as the Dark Star by the Shadowmoon clan.

Although sacred to all orcs, the Warsong clan have claimed it as their own and set up camps in the Spirit Woods. The pale orcs have a cavern system known as the Underpale beneath the ship. Within the Twisting Nether, Voidwalkers led by Invalidus prepare portals to attack Draenor from Oshu'gun. The pale have already unleashed void elementals here.[1]

Cho'gall was sent by Gul'dan to Oshu'gun to subjugate K'ure and obtain its power. Cho'gall, however, ends up transforming K'ure into a void god called Decimatus, and turning against Gul'dan within the depths of Oshu'gun. He also enslaved the fury Gordawg here. Farseer Drek'Thar or Vindicator Nobundo (depending on the player's faction) leads the battle against Cho'gall.

A piece of the Genedar that broke off during the crash can be found at The Burial Fields in Shadowmoon Valley. Smaller pieces landed throughout the zone.

A faint model of the intact ship can be seen at Teluuna Observatory. It looks somewhat different than the Tempest Keep satellites.