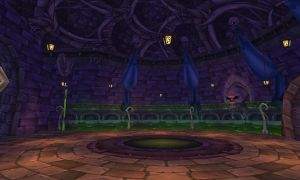 The Outer Ring in the Arachnid Quarter

The Outer Ring connects the four quarters of Naxxramas. Depending on which quarter you are in, you will encounter enemies ranging from spiders to death knights. Shades patrol the Outer Ring, constantly making a habit of appearing out of nowhere.

Though the Outer Ring connects each quarter, it appears the ends are blocked off by a wall. This is to prevent raids from only having to clear one quarter to access other quarters 'end' bosses. However, underneath the walls are tunnels that one can swim through to access the outer ring of another quarter. 'End' bosses however, will be blocked off unless the other bosses in their respective quarters are cleared.

In the original version of Naxxramas, the Outer Ring contained enemies from every wing (ghouls, gargoyles, death knights, necromancers, plaguehounds, spiders, and more). They also contained Frozen Runes in the now "unused" area, which gave raids reason to progress further beyond the final boss rooms.