“A world shattered?" His tone told her that he thought her words a gross understatement. "Terrible hardly begins to describe it. We thought the world was ending. The sky burned. The continents ripped apart. Lava flowed. Wild magic danced from mountain peak to mountain peak. Sometimes the tips of mountains rose into the air and floated away. Sometimes they crashed down and killed thousands.”

Outland (often mistakenly called "Outlands"[4] or "The Outland"[5]) is the shattered floating remnants of the destroyed world of Draenor, the homeworld of the orcs and refuge of the draenei. After the sundering of Draenor, Outland was thrown partially towards the Twisting Nether, and is now in a constant state of degradation.[6] It became the domain of the pit lord Magtheridon, who was eventually deposed and replaced by Illidan Stormrage until his death at the Black Temple.

It is the theater of the The Burning Crusade expansion. From a gameplay point of view, Outland used to be accessed from Azeroth through the Dark Portal in the Blasted Lands but is now accessible via mage portals in Orgrimmar and Stormwind City.[7]

Outland landscape and the Twisting Nether.

Outland was created when Draenor became the focus of an attack, via the Dark Portal, of an Alliance expedition aiming to end the orcish threat to Azeroth once and for all. In the midst of the ensuing battle, the elder shaman Ner'zhul attempted to allow the remaining orcs on Draenor to escape to other worlds by opening other dimensional portals; however the presence of so many portals tore the planet apart, launching torn fragments of the former world towards the Twisting Nether, and the barely-habitable remnants were renamed Outland. Most life on Draenor was wiped out in the explosion, and the surviving continent was drastically reshaped; most of the remaining wildlife became sickly or corrupt.[8] Due to the planet's destruction, the barriers between Draenor and the Twisting Nether collapsed, and the shredded reality left open paths to all various corners of the cosmos. Outland had become one of the most important strategic places. Many of Ner'zhul's portals were permanently open and the world now acted as a crossroads for any force that wished to travel quickly from one end of the universe to the other.[9] Despite this plenty of the species on the planet survived, with some even being transformed by the creation of Outland.

Some time after a pit lord named Magtheridon rallied the surviving orcs (with the exception of the Mag'har) and took control of Outland. Using the remaining dimensional gates, he drew demons from the rest of the Twisting Nether to aid him.

Most draenei that remained in Outland have become horribly mutated, and bear only a passing resemblance to their former selves.

Illidan as Lord of Outland

Outland before the invasion of the Alliance and Horde expeditions in Chronicle Volume 3.

The night elf demon Illidan Stormrage and many of the naga and blood elves fled to Outland and succeeded in defeating Magtheridon and conquering the wasteland. After their defeat in Northrend at the hands of Prince Arthas, they returned and established permanent settlements there.

Since then, both the forces of the Light and the Shadow have realized Outland's usefulness. It can serve as a launching pad for the invasions of the Burning Legion, or as the staging ground to the forces who fight against the Legion. In response, both the naaru and the Legion have sent their agents to secure the world for their own purposes.

Now, the Alliance and the Horde must battle the forces of the maddened Illidan and the murderous followers of the Legion to safeguard Azeroth from Kil'jaeden's Burning Crusade.

Plant life still flourishes in places such as Sylvanaar in Blade's Edge Mountains and the Cenarion Thicket in Terokkar Forest. The main base of the Cenarion Circle's expedition is from Cenarion Refuge in Zangarmarsh.

Thrall traveled to Nagrand in Outland to converse with the elements there and turned to Aggra for shamanic instruction.

Years later, Xaraax imprisoned Greydon Thorne in the Hidden citadel in Hellfire Peninsula, and Makasa Flintwill led an army from Azeroth and invaded it.[10]

Archmage Vargoth says that the current state of Outland is constantly degrading.[6]

Lunelli in Shattrath City has since the shattering of Azeroth learned crafting recipes from the earth and the wind.

Kor'vas Bloodthorn and an Order Hall leader clashed with the forces of Highlord Kruul at the Stair of Destiny.

The Burning Legion and the champions of Azeroth briefly clashed in the Arcatraz during the offensive on Argus.

When Varok Saurfang was talking with Thrall in his friend's new home in Nagrand, he spoke about how good the world looked. But that it felt wrong, as Outland was broken and falling apart. After Varok touched Nagrand's grain, it crumbled.[11]

Nagrand overseen by a Mag'har.

Before Draenor was torn apart by the portal rifts, it was a vast planet of continents and seas, much like Azeroth. When the world was destroyed it was tossed towards the Twisting Nether. It no longer had its sun, but its moon, the Pale Lady still hovered looking far larger than it ever did before. Other spheres now existed as well, including a rosy one, and a smaller light blue one.[12] This may be partially wrong as the sun and sunlight[13] were later described to be present.[14]

The damage to the world had sundered reality, gravity, space, and even time may not even function properly.[12]

In World of Warcraft: Illidan however, Illidan describes Outland as "a tiny speck in the infinity of the Great Dark Beyond".[16]

This may just have been an oversight as previous sources and the game put Outland fully shrouded by the Twisting Nether. Later, World of Warcraft: Chronicle Volume 3 described the state of Outland with barriers between Draenor and the Twisting Nether being collapsed, leaving open paths to all the various corners of the cosmos.[17] However, it is also worth to note that demons that died in Outland (such as Kazzak and Ambassador Hellmaw) did not die permanently as they should when dying in the Nether. As such, it can be speculated that Outland is not fully shrouded in the Nether. 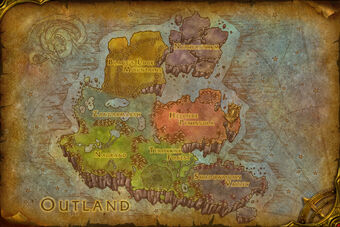 Outland currently consists of seven large zones that connect to each other but differ sharply in environment.

From Outland from the Burning Crusade section of the Official site: The scattered wastes of Outland are all that remain of Draenor, the once beautiful homeworld of the orcs. Following the Second War, the Alliance invaded Draenor by crossing through the Dark Portal. To their horror, they discovered that Ner'zhul - the dark warlord of Horde - had constructed a series of new gateways that could lead the beaten Horde to newer, unspoiled worlds. As the Alliance forces closed in around him, Ner'zhul opened his gateways as a means of escape. However, the gateways' clashing energies resulted in a catastrophic explosion that ultimately ripped the world of Draenor apart.

Nearly thirteen years later - towards the end of the Third War - the fallen night elf, Illidan, discovered that huge chunks of Draenor still existed - floating upon the astral winds of the Twisting Nether. After his defeat at the hands of the evil Prince Arthas, Illidan fled to the remnants of Draenor and dubbed them Outland. He quickly seized control of the chaotic region and sealed the last of Ner'zhul's cursed gateways.

Though he is the undisputed ruler of the ravaged land, Illidan lives in fear that he will be discovered by his powerful enemies - most notably Arthas, the new Lich King, and the remaining Lords of the Burning Legion. Currently, Outland is home to a number of scattered draenei tribes, primitive orcs and the powerful, arcane creatures of the Nether itself. Agents of the Burning Legion have also targeted the region as a vital strategic location in their unending Burning Crusade to scour all life from the universe.

Elemental Rifts briefly appeared during patch 4.0.1 and 4.0.3a during the Cataclysm world event.

Questions have been raised about the continuity of the Burning Crusade storyline following the Cataclysm, and blue-poster Bornakk has addressed this issue:

You have to consider the changes with some form of leniency, while technically you could say that if the story progresses then we need to remove a bunch of the content from Outland and Northrend as those are over - but for numerous reasons, you can probably see why that would be a bad idea. This is the same type of thing that happens by just having a persistent world, just because one quest was completed where something was killed doesn't mean it vanishes from your sight forever. While a level 80 doesn't need to return to the locations of Outland and Northrend and can focus on the new stories - a new character hasn't helped defeat the villains in those areas so they still need to answer the call and fight them off (or in the terms people are tossing around, they need to level). [1]

The portal to the Blasted Lands in capital cities now leads directly to Hellfire Peninsula.

Following patch 7.3.5, level scaling was implemented in Outland, with maximum zone level being 80.

Outland consists of one large, central landmass with smaller chunks and debris floating all around it. Black chains connect some of these islands; adventurers can walk across these chains (they must be careful to avoid an unpleasant tumble into the Twisting Nether), fly, or in some cases jump to other islands. Outland is mostly bare and lifeless, like Draenor before its demise. The orcs built huge, black fortresses across their world, and some of them still stand. Burning Legion encampments and wretched draenei communities are scattered across the isles.[18]

Although Outland lies within and is part of the Twisting Nether, in many sources its properties are different than the Nether itself. Outland is described as having normal gravity, normal time, and finite shape and size. Although it is still alterably morphic, and many of its rocks defy gravity.[19][20]

Druids have magically replanted some locations on the central landmass of Outland that were formerly desolate, describing the areas as "Green Havens".[18]