For other Overlords, see Overlord (disambiguation). For his appearance at the Granite Springs, see Drakuru. 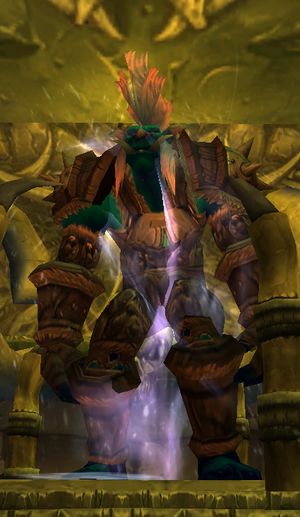 Overlord Drakuru is the Scourge warlord of the Voltarus necropolis, promoted by Arthas after his successful overtaking of Drak'Tharon Keep. He is tasked with subverting the local Drakkari trolls and making them into an army of Blight infused trolls. Adventurers of the Horde and Alliance are sent as undercover agents by the Knights of the Ebon Blade to undermine his efforts and slay him. In the end, however, the Lich King is the one who slays him, disgusted by his defeat and amused by the player's duplicity. 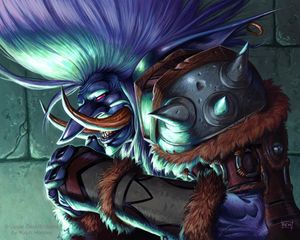 Drakuru in the trading card game

He is first encountered in Grizzly Hills as Drakuru, a mere ice troll. As the quest-line he gives progresses, he becomes more powerful and ultimately ascends to his current position.

Drakuru is fiercely loyal to the Lich King and has zero tolerance for failure. He often offers great power to his subordinates to motivate their success, and will follow through on his offers, demonstrated when he gives you his

[Scepter of Domination] saying that you'll need it to lead his army of Blightblood Trolls. Also, he seems to have arranged having certain adventurers made into the Scourge serving under him, in a crude form of affection towards them.

Drakaru owns a variety of powerful scepters. It is unknown if these were given to him by the Lich King, or if he already possessed them before joining the Scourge.

He is involved in the following quest chain: