Overseer Idra'kess is a level 80 elite naga located in on upper-tier inside Nespirah in Shimmering Expanse. He is in charge of the Nespirah pearl mining operation and plans to use her as a giant war beast for the naga. 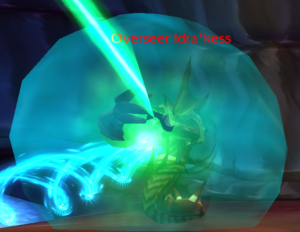 Idra'kess is guarded by two Idra'kess Mistresses. When attacked, these two will place a powerful shield over him, and both must be slain for it to disappear. While you fight them, though, Idra'kess will not attack, as he is channeling a spell to awaken Nespirah. After the shield breaks, Idra'kess will engage you. He isn't particularly strong but has a great amount of health. However, once he reaches 50% health, Nespirah will begin secreting fluids to harm him. Lure him into the red Nespirah Fluids that will begin appearing, and they will explode on contact with him, dealing great amounts of damage.