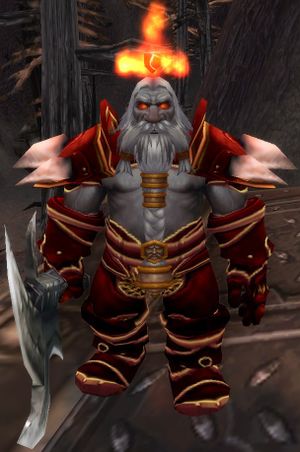 Overseer Oilfist in World of Warcraft.

“The Thorium Brotherhood are master craftsmen who share their knowledge with those who earn their favor.”

Overseer Oilfist is a Dark Iron dwarf found in Thorium Point in the Searing Gorge. He is the Overseer of the Thorium Brotherhood.

Welcome to Thorium Point. As Overseer, I'm responsible for all the activities of the Thorium Brotherhood. While that mainly involves mining, smithing, and some minor guard duty, we've lately become more of a martial organization... out of necessity.

You're welcome among us anytime, <name>.

Oilfist joined the Thorium Brotherhood as the apprentice of Lokhtos Darkbargainer and quickly rose within the guild. Oilfist conceived of a plan to covertly craft items necessary to make an escape from Blackrock Depths. During the escape, his skill at arms helped the guild overcome its elemental taskmasters. Once free, Oilfist was a natural choice to replace the absent Lokhtos as the guild’s overseer. Overseer Oilfist takes his job seriously, and deals harshly with any who disobey him. Although he has many underlings, Oilfist has no qualms about getting his hands dirty — whether in the forges or on the battlements. His favorite weapon is a heavily enchanted multi-bladed dwarven waraxe.[1]