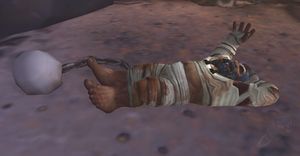 Owynn Graddock is a dwarf rogue of the SI:7. He has darkly tanned skin and black hair and beard and brown eyes.

Shortly before the Cataclysm, he was handpicked by Mathias Shaw to lead 17 SI:7 rogues sent to liberate Ironforge and assassinate Moira Thaurissan. Prior to the mission, Graddock had scouted out almost the entire length of the Deeprun Tram's tunnel, so the group knew what to face. His team successfully eliminated any threat in the districts of Ironforge and eventually divided his team sending half of his assassins, Brink among them, with Varian to get Moira out of her chamber.[1]

Agent Graddock was sent to keep an eye on the Bloodmaul ogres in Frostfire Ridge on alternate Draenor but was captured. Bodrick Grey sent the adventurer to find and release the dwarf. Upon getting his gear back, the two attacked Borgal Doomfist in spirit realm in order to find the

[Soulgrinder]. He didn't participate in the fight as Borgal soul-grasped him, but the ogre chieftain was slain. Owynn wanted to find a priest to help Orlana Strongbrow who helped them to defeat the ogre.