Not to be confused with Fozruk.

Ozruk has served as Stonecore's guardian since Deepholm's creation. It is unknown why Ozruk has remained in the Stonecore, but it has become apparent that the guardian now believes that anyone opposed to Deathwing is a threat to Deepholm, and should therefore be destroyed. 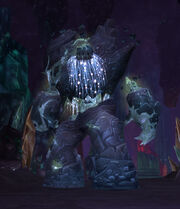 Ozruk in World of Warcraft.

Ozruk should be pulled into the tunnel and tanked against a wall, this is so that on the knockback the tank will need minimal repositioning, the tank should run to the opposite wall and continue tanking as normal.

In heroic mode, there are a few changes. Periodically, he will cast a paralyze debuff on the party, followed by a spell called Shatter. The paralyze effect lasts for eight seconds, and deals about 50,000 damage when it expires, this damage can be avoided by removing the debuff before it expires. Paralyze can be broken by taking damage and is also dispellable. There are a couple of ways to deal with this:

After casting Paralyze, Ozruk will begin to cast Shatter, it is essential that your group is away from the boss as this will one shot most players (including tanks).

The other main ability in heroic is his Ground Slam, which will erupt a cone of spikes from the ground in the direction he is facing. There is a cast time on this so the tank should ensure he is facing away from the group at all times and once Ozruk starts casting the tank should temporarily move behind him. This ability will one shot a tank. Melee and ranged should not be infront of the boss, but if they are they will also need to move.

Finally, Ozruk will enrage at 25% health for 1 minute, increasing his damage by 50%. This can be dispelled with any Enrage removing ability.

You should plan to kite Ozruk slowly down the hall during this encounters, with the tank always running away from the rest of the group during the Shatter cast, so that Ground Slam will always be directed away from the party. Don't let him go too far, or you'll run into mobs on the other side of the tunnel.

A good plan to use against Ozruk is for the tank to immediately run behind him (so the tank's back is toward the narrow tunnel). This will ensure that all other party members are behind Ozruk at the mouth of the tunnel when he casts Ground Slam. Upon casting Ground Slam, the tank should run straight through Ozruk and stop behind him until the spell is done. Once the spell has been cast, the tank should then immediately go to the other side, again with his back to the narrow tunnel. Ozruk will cast Shatter soon after Ground Slam, and this method will once again ensure that he is facing away from other party members at all times. As long as the tank continues to move "back and forth" through Ozruk as he casts Ground Slam, the fight will be fairly easy.

Warrior tanks should resist the temptation to return to Ozruk after Shatter using Charge or Intercept. Ground Slam is cast very soon after the Shatter phase, and if you accidentally rush behind the boss before this happens, the boss will face the party and probably kill many of them.

Aggro
None may pass into the World's Heart!

Spike Shield/Elementium Bulwark
Break yourselves upon my body. Feel the strength of the earth!

Killing a player
The cycle is complete.

Death
A protector has fallen. The World's Heart lies exposed!