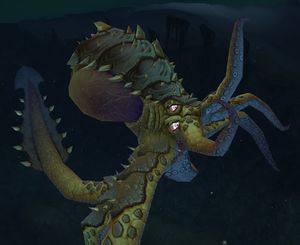 Ozumat in the Abyssal Depths.

Ozumat is the patriarch of all kraken.[1] It appears to be in the service of the Old Gods' forces, fighting alongside the naga and faceless ones during

[82] Defending the Rift. It is the final boss of the Throne of the Tides in World of Warcraft: Cataclysm and makes several appearances during the Vashj'ir storyline.

In Kelp'thar Forest, players starting out in Vashj'ir are immediately shipwrecked by Ozumat.

Players reach Abyssal Depths via a new submarine, which is immediately used to attack Ozumat. Later during the naga's battle against Neptulon, Lady Naz'jar unleashes Ozumat. Ozumat attaches itself to Neptulon's "head" leading to the victory of the naga. After the battle with Ozumat in the Throne of the Tides, Ozumat swims away with Neptulon.[2]

Neptulon would eventually free himself. 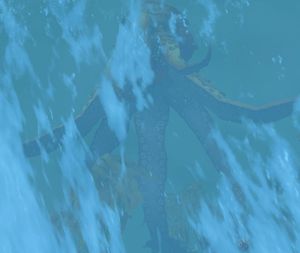 Ozumat behind the Nazjatar waterwall.

Ozumat has not been seen since the Cataclysm, but the drunk Master Gunner Line at Thresher's Wharf claims to have killed him singlehandedly.[3] Ozumat shows up, despite the claim, in Nazjatar where he can be seen peering in through the waterwall with a few Abyssal Megrims.

Tales of the monstrous kraken that terrorize Azeroth's high seas were once relegated to myth... but no longer. By some ill means, the naga have bent Ozumat - the patriarch of all kraken - to their will and unleashed him against Neptulon and his followers.

Players begin this encounter by talking to Neptulon, then agreeing to defend him while he attempts to cleanse the waters surrounding him. If Neptulon dies, the encounter will reset. Stage one lasts 60 seconds.

Stage three begins when the three Faceless Sappers are destroyed. Ozumat begins to inject his blight into the entire room, and becomes attackable. When Ozumat reaches less than 10% of his remaining health, Ozumat retreats and the players win. 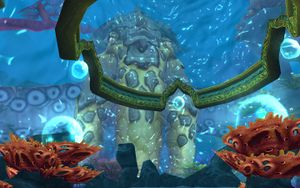 Ozumat seen from the Riptide.

The encounter consists of three phases. During phase 1, three different types of adds spawn, and must all be tanked and killed; the murloc packs are AoE'able, while the faceless adds require single-target damage. Interrupts on the casters are beneficial here. After a certain amount of adds have been killed, Phase 2 will begin.

In Phase 2, three faceless sappers appear and begin channeling a spell at Neptulon; DPS must kill those sappers. The tank must pick up and kite the Blight Beasts that spawn through this phase, taking care not to kite them through the other party members. Ozumat makes an appearance in this phase, spewing Blight of Ozumat at random party members, leaving a blighted area on the ground that people should move out of. The phase ends once all three faceless sappers have been killed; Neptulon purifies the waters, granting everyone a +health, +damage, and +regeneration buff. The Blight Beasts should be killed at this point.

Phase 3 is a DPS race: Ozumat must be driven off before Blight of Ozumat, now cast at the entire room, stacks to the point of being unhealable. This is generally the phase you wish to use DPS cooldowns on. Ozumat will capture Neptulon and retreat when his health has been reduced enough. A chest called Neptulon's Cache will be left behind, containing loot for the encounter.

Despite antagonizing both the Horde and the Alliance, in addition to Neptulon, the vrykul and the Earthen Ring forces, Ozumat may not be acting of his own accord - his will was apparently "bent" by the naga.