Pa'ku, also known as the Master of Winds, is a pterrordax loa worshiped by the Zandalari. Pa'ku is the master of the Zandalari's navy,[3] and her high priest is Hexlord Raal.[4] The followers of Pa'ku and Gonk do not get along.

While aiding Wardruid Loti and Hexlord Raal against the Crimson Cultist within Zanchul, the Speaker of the Horde became imbued with the powers of Gonk and Pa'ku. Following the death of Dregada, the Speaker was informed that they had to choose between the two loa.[5] Those who chose Pa'ku were delivered to the loa by Raal by flying on the back of Ata the Winglord. After the pair arrived at Pa'ku's aviary, the Speaker learned that, unlike the other loa worshiped by the Zandalari, Pa'ku tended to act aloof and rude, seeing mortals as below her (literally and figuratively) and was prone to dropping followers she didn't like from great heights onto sharp rocks. After the Speaker earned Pa'ku's admiration, the loa instructed them to raise a statue to him before the steps of Dazar'alor so that all the trolls of the land knew they had bargained.[6]

Pa'ku participated in the defense of Zuldazar when Zul and his forces sought to destroy the Great Seal. She transported Princess Talanji and the Speaker of the Horde to the Zocalo. She, Gonk, and Kimbul battled Mythrax the Unraveler while King Rastakhan took care of Zul.[8] 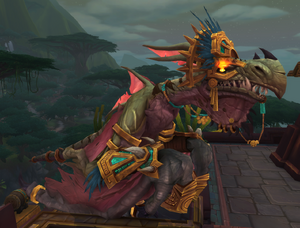 The loa assisted her chosen aspect during the Battle of Dazar'alor.[9]

In accordance of the ritual of queens and kings, Talanji sought the judgment of the loa.[10] During the trial, Pa'ku tested her commitment.[11]


Pa'ku, o Pa'ku is coming for you.
She knows de seas and de land,
From here to dere and back again.
Dere is no place for you ta hide,
Should ya get yaself on her bad side.


Pa'ku, o Pa'ku is coming for you.
In a flash she will strike,
Smooth and calm, den all de fright!
De truest loa, full of pride,
If ya always keep her satisfied.[12]

What would you ask of the loa of the skies?

During the Web of Lies questline
We will hunt these heretics to the ends of Azeroth. I will gather my flock and we shall rain death and rocks down upon the heads of these vile creatures who dared turn their backs on us.
For now, my flock shall search the skies and divine what Zul and his traitors doing.[sic]

During the March of the Loa questline
When I get my claws on Yazma and Zul, I am going to drop them on a rock!