From Wowpedia
(Redirected from Pack Form)
Jump to: navigation, search 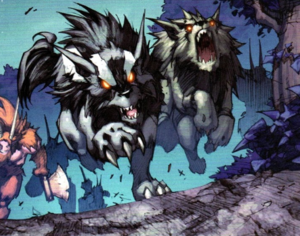 The druids Ralaar and Arvell in pack form

The pack form[1] is a druidic animal form that takes the shape of a wolf. Its power and ferocity embody the uncontrollable fury of the wolf Ancient Goldrinn. Those who undergo the transformation thus tend to lose their minds to the form's feral animal instincts. Malfurion Stormrage himself had experimented with the form long ago and, consumed by its rage, went as far as blindly attacking his mentor, Cenarius. The demigod had to put him to sleep within the Great Tree Daral'nir, where he regained his senses. Due to its uncontrollable nature, Malfurion thereafter prohibited the use of this form.[2]

The Druids of the Pack were druids who disobeyed Malfurion's edict, and eventually lost themselves to the wolf form. During the War of the Satyr, Ralaar Fangfire would become their leader and through his efforts to control and master this untameable form, created the first worgen.[3] Despite their good intentions, the worgen were still unable to control the form's unbridled fury and turned against the night elves. Malfurion was forced to banish the worgen to sleep eternally within Daral'nir in the Emerald Dream, mourning the loss of his fellow druids.