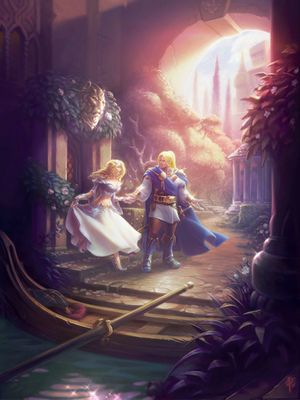 Jaina Proudmoore and Arthas Menethil in the gardens of Lordaeron's palace.

The Palace Gardens was the location that the dreadlords who were left in charge in Lordaeron were found by the death knight Arthas Menethil upon his return from Kalimdor. It is unknown if the entire mission took place in the gardens or just the opening cutscene.

The gardens were probably the ones seen behind the palace in the Warcraft III Human campaign intro cinematic, or could have also been located in the patio leading to the palace, seen in the ending. They are probably not shown due to scale issues but they could have been destroyed.