These paladin quests are specific to paladins.

These quests are available once the paladin reaches level 3:

These quests are available once the paladin reaches level 20:

These quests are available once the paladin reaches level 50:

There are also series of quests to get level 60 epic paladin armor sets. They are seldom done anymore.

The Battlegear of Eternal Justice is obtained from Ruins of Ahn'Qiraj quests and requires Cenarion Circle rep:

The Avenger's Battlegear set is obtained from Temple of Ahn'Qiraj quests and requires Brood of Nozdormu rep:

The reward for this quest series was the resurrection spell,

A paladin trainer would instruct you to travel to the nearby capital city and speak to the trainers there. You received a quest from that trainer. For humans, the quest-giver was Duthorian Rall in the Cathedral of Light in Stormwind City; for dwarves, Tiza Battleforge upstairs in the Hall of Mysteries in Ironforge, and for draenei, Jol in the Vault of Lights in the Exodar.

The reward for this quest series was the resurrection spell,

The quest giver for this, and other quests, was Knight-Lord Bloodvalor. Although technically not a Paladin trainer, he is in their building, in the Hall of Blood section of Silvermoon City, just to the north of the northernmost entrance into the building.

Level 20 The Tome of Valor (Sense Undead, Bastion of Stormwind and Verigan's Fist) 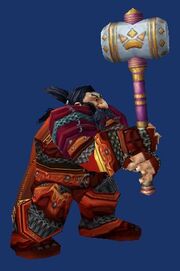 The rewards for this quest series was the ability

[Bastion of Stormwind] and an incredibly nice two-handed mace,

An NPC near the trainer in your capital city provided you with a volume, the Tome of Valor. Using the tome to start the quest, you were redirected to talk to your trainer. The next quest would take you to Westfall's Longshore, on the far southwestern coast.

You had to speak with Daphne Stilwell, accept her quest, and then defend her from several waves of attacking Defias. This quest could be soloed at level 20 with great care, but bringing a friend would make it considerably easier. Daphne could also be healed by your healing spells. You then had to return to Duthorian Rall in Stormwind City to learn

[Sense Undead] and receive the

At this point, your trainer directed you to speak with Jordan Stilwell outside the gates of Ironforge. Jordan gave you the quest

[Verigan's Fist]. The note provided the details on where and how to get each of the four pieces.

Once you provided all four items to Jordan Stilwell, he crafted the mace for you. 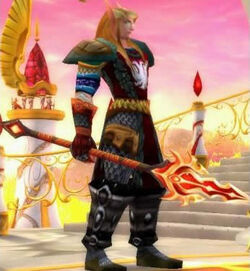 For this quest, Knight-Lord Bloodvalor sent you to talk to another of the Blood Knights to the north of Silvermoon City, Master Kelerun Bloodmourn. The meeting point was to the north, through the Ruins of Silvermoon and then east just before the bridge to Sunstrider Isle. Bloodmourn directed you to use a crystal and to defeat four Blood Knight Champions one after the other. Each of these Knights fought with a different aspect of the paladin styles. For instance, one used retribution spells with a two-handed weapon, while another used a shield and sword and used protection abilities. The fights were not particularly difficult despite their titles of champions and the fact that they could heal themselves. After defeating the champions you were sent back to Bloodvalor and received the

[Blood-Tempered Ranseur]. The note provided the details on where and how to get each of the four pieces.

On your return to Bloodvalor with the materials, he then sent you to Bemarrin, a blacksmithing trainer just outside across the street. He then forged the weapon for you.

You were rewarded with your paladin weapon, the

[Blood-Tempered Ranseur], as well as the rank of Adept in the Blood Knights order.

This quest simply consisted in speaking with Duthorian Rall in Stormwind City's Cathedral of Light. After that he would teach you the

[Summon Warhorse] spell. With Patch 2.4.3 the quest was removed and the warhorse was instead added as a learnable spell from any paladin trainer.

It is notable that until Patch 4.0.3a draenei paladin were stuck riding horses instead of elekks, until the

This quest simply consisted in speaking with Knight-Lord Bloodvalor in Silvermoon City's Hall of Blood. After that he would teach you the

[Summon Warhorse] spell. With Patch 2.4.3 the quest was removed and the warhorse was instead added as a learnable spell from any paladin trainer.

It is notable that in Patch 5.0.4 blood elf paladin got their own version of the spell:

This was a quest introduced in Patch 1.8.0. Most other classes had a similar quest which gave a rare reward out of three choices.

It started from Lord Grayson Shadowbreaker, sending you to Chillwind Camp in the Western Plaguelands to assist Commander Ashlam Valorfist. The main objective was to collect 20 Minion's Scourgestones, simply by equipping an

[Argent Dawn Commission] and killing undead at Sorrow Hill. The scourgestones then had to be given to High Priest Thel'danis who purged them.

From there, Ashlam sent you to the Sunken Temple to retrieve 6 voodoo feathers of different colors. These feathers were dropped by the 6 seal guardians (undead trolls) located in the Upper Balconies of the temple. The same feathers were required for similar Warrior, Warlock, Shaman and Priest quests, so finding a group to kill the trolls was not a problem.

Returning the 6 feathers to Ashlam made it possible to use their magic and turn the evil of one stone against itself, thus creating an

[Holy Mightstone], which was given to you with one of the following:

The quest started at either Champion Bachi in Silvermoon City or Champion Cyssa Dawnrose in Undercity, who sent you to the Bulwark to meet with Mehlar Dawnblade. Once there, you were directed to prove your hatred by taking vengeance on the Scourge. Notably by having a chat with the Argent Officer Garush and acquiring an

[Argent Dawn Commission], then returning to Mehlar with 20 Minion's Scourgestones.

After returning the scourgestones to Mehlar, he crushed them and asked you to bring the remains to Lady Sylvanas Windrunner, who had the knowledge of how to turn these fragments into a weapon that could be used against the Scourge.

Sylvanas wasn't very happy to see you with those crushed stones, but knew that you were fuelled by the same vengeance as her. She sent you to the Temple of Atal'Hakkar. In there you needed to kill Atal'alarion who was carrying a

[Putrid Vine]. By returning it to Mehlar, he was able to forge the vine and fragments into

After finding this book written by Uther the Lightbringer himself, you were expected to return it to Lorekeeper Mykos in the Athenaeum of Dire Maul and be rewarded with a Royal Seal of Eldre'Thalas.

Lord Grayson Shadowbreaker in Stormwind City gave you two quest series: one to get an

[Exorcism Censer], one to get sufficient barding. Once you had both items, you received a short quest to obtain the

[Divination Scryer]. You then had to use the scryer in Scholomance to summon monsters to fight, at the end of which you obtained your

All party members had to be in the room before placing the Scryer because the doors then closed. Waves of mobs spawned, each requiring a particular Seal to be used on them in order to defeat them. A

[Judgment] used with the appropriate Seal would release a strong AoE effect against the mobs and/or stun them:

[Charger's Lost Soul] on his body and bringing it back to the horse redeemed it and made it your mount, teaching you the

Bringing multiple paladins to the quest was a great idea, and caution had to be taken because wiping during this fight meant having to go back to Stormwind to get another Scryer and reset the instance, as the door to the Great Ossuary would remain closed. This was not a bug; Blizzard viewed this as a necessarily difficult challenge, with the reset an appropriate "punishment" for failure.

Patch 1.12.1 updated the quest so that the Charger also came with the Journeyman Riding skill. Patch 3.2 removed the quest requirement completely and made the Charger mount learnable from a trainer at 40.

Knight-Lord Bloodvalor started this quest-chain with a summons, and sent you to talk to Lord Solanar Bloodwrath (prior to Patch 2.4 it was Lady Liadrin herself) who would then give you all the following steps.

– appeared outside of the chapel and charged in. Once they were all defeated, the quest was marked as completed and you could return to Lord Bloodwrath.

In addition to receiving the

[Blood Knight Tabard] as well as the rank of Master in the Blood Knights order.

The quest also came with the Journeyman Riding skill. Patch 3.2 removed the quest requirement completely and made the Charger mount learnable from a trainer at 40. It is notable that in Patch 5.0.4 blood elf paladin got their own version of the spell:

It is notable that the quest chain for Horde paladins was much easier and cheaper than the one for their Alliance counterparts.