This article lists the races that are able to become paladins, along with the lore behind each.

The first paladins on Azeroth were humans. They originally started out as clerics under the Holy Order of Northshire Clerics, carrying the mission of spreading the wisdom of the Holy Light across Azeroth. When the Horde invaded the Eastern Kingdoms through the Dark Portal during the First War, the clerics rushed to the battlefield to fend off the beasts. Although wielding powerful magic, the clerics were unprepared for war and suffered heavy losses. At the end of the war, Archbishop Alonsus Faol and his apprentice Uther founded the Knights of the Silver Hand. This order trained clerics and knights in both the ways of war and divinity. They were crucial in the Alliance of Lordaeron's victory in the Second War, both healing friends and crushing foes on the battlefield.

The Silver Hand suffered heavily during the Plague of Undeath and were nearly wiped out. Uther himself was killed by his own apprentice, Arthas Menethil, who had become a death knight. In the order's destruction, the Scarlet Crusade and the Argent Dawn were born. The Silver Hand slowly recovered, aiding the Alliance (and slightly the new Horde) against the Burning Legion during the Third War. Eventually, it joined forces with the Argent Dawn to form the Argent Crusade, led by the veteran Tirion Fordring, traveling to Northrend to finish off the Lich King and his Scourge once and for all. The Argent Crusade further teamed up with the Knights of the Ebon Blade to form the Ashen Verdict and were ultimately successful in their mission.

Ironforge dwarves, closely allied with the Humans (who were the ones that introduced them to the Holy Light), have developed strong bonds, and some of them joined the Knights of the Silver Hand. Part of their introduction into the Silver Hand was also the order's need to replace paladins lost during the Third War (although they had previously accepted a few dwarven paladins as far back as the Second War, it was uncommon). It was also the dwarves' leader King Magni Bronzebeard who forged the Ashbringer.

One of the most distinctive features of an Alliance-paladin is his weapon; a large, two-handed war hammer. This "paladin hammer" was once the favored weapon of the Silver Hand, being wielded by both humans and dwarves.[citation needed]

The paladin hammer fell out of favor as the primary paladin weapon after Uther's death.[citation needed] 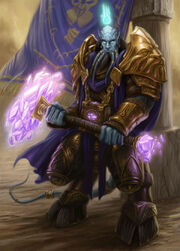 Zophos the Vengeful, a draenei paladin.

The draenei were introduced to the Light by the naaru while sailing across the cosmos on board Oshu'gun. Fleeing from the Burning Legion that consumed their original home, Argus, they were blessed with Light-given knowledge and power by the naaru. Planning to join the draenei with other forces in the cosmos that would stand against the Burning Legion, the naaru planned to create a a single unstoppable army of the Light. The draenei vowed to honor the Light and uphold the naaru's altruistic ideals. The power of the Light is embedded in the draenei so deeply that all of them can call upon it through

[Gift of the Naaru], regardless of class. Today, draenei paladins become Vindicators of the Hand of Argus. Their class mounts are

Because of their strong connection to the Burning Legion, in addition to having landed on Azeroth after the Plague of Undeath gushed across Lordaeron, draenei are likely more acquainted with demons rather than undead. This is probably slightly differing them from human and dwarf paladins, which are used to fight the Scourge instead.

[Hammer of the Naaru].

Lightforged draenei, a race empowered by the Light, can naturally be paladins.

Blood elves were once high elves allied with the humans like the dwarves. Like the two others, high elves also believed in the Holy Light. A few were members of the Silver Hand, such as Mehlar Dawnblade, while others belonged to the high elven Royal Guard. The high elves began to distance themselves from Light worship after the Third War, during which Quel'Thalas came under the brutal attack of the undead Scourge. The survivors, now calling themselves blood elves, came to view the Light (which many believed had abandoned their homeland in its hour of greatest need) with contempt.

No longer willing to obey the Holy Light's edicts, sin'dorei paladins bound it to their will instead by using the divine energies of M'uru, a naaru. M'uru was the sole guardian of Tempest Keep after it landed in Netherstorm and brought most of the naaru present in Outland there. After Illidan Stormrage's failed attempt at destroying the Frozen Throne, Kael'thas Sunstrider returned to Outland in order to create a new haven for his magic-addicted people. He and his forces assaulted Tempest Keep and seized M'uru, sending it back to Silvermoon City for the elves to feed on its powers. This created the Blood Knights, a military force of blood elf paladins similar to the Silver Hand. The class mounts for the Blood Knights are

Later, Kael'thas stole M'uru once more, spiriting him away to the defiled Sunwell. Bereft of a power source, the Blood Knight leader, Lady Liadrin, sought the forgiveness of the naaru's leader, A'dal, in Shattrath City. Pledging themselves to the defeat of the Legion and the restoration of Silvermoon, the Blood Knights fought alongside the Shattered Sun Offensive to relieve the Sunwell. M'uru, now a darkened void entity, was killed during the battle, though his heart was used to revitalize the exhausted Sunwell, recreating it as a fount of both holy and arcane energies from which blood elf paladins now draw their power. This act wrought on a new and more harmonious perspective of the Light for some of the elves, including Liadrin herself.

The Blood Knight headquarters (the Hall of Blood) can be found within Silvermoon. New blood elf paladins become members of the order (initiation begins at level 12) during their class-specific questing, which awards them a

[Blood Knight Tabard] and a weapon of choice. 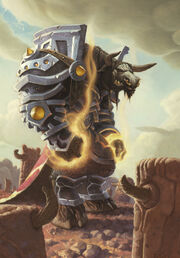 With the Cataclysm expansion, tauren are also able to become paladins. Their order is known as the Sunwalkers, and is made up of tauren who worship An'she, the sun. Apparently, their order came to be when some of them wondered if it was possible to drain the power of light from the sun, similar to how druids and night elf priests get their power from the moon. Aponi Brightmane seems to be the first tauren paladin. Tauren Paladins have

The Zandalari Empire worship and draw power from the loa and their paladins are called prelates (also called freethinkers during ancient times).[3] The prelates specifically draw their power from Rezan, holy loa of kings and queens. Only children who show great prowess in combat at an early age are taken into the holy order to train to become prelates. Following the death of Rezan at Zul's hand, few of them remain and their power is diminished.[4] Thanks to Queen Talanji's help, the prelates have regained their power and connection with the Light.[5]

High elf paladins are rare, but do exist. Rulen Lightsreap and Champion Isimode are two such paladin serving the Silver Covenant, in Dalaran's Silver Enclave and the Argent Tournament Grounds respectively.

Half-elves may become paladins, although the only well-known example is the half-quel'dorei named Arator. 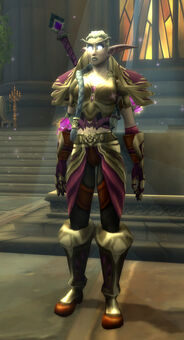 Night elf paladins are very rare, with only a few being seen in game. Delas Moonfang is a priestess who is learning the ways of a paladin, where her uncle Nerus Moonfang is an ancient night elf ghost who has paladin abilities, though he's never directly stated to be a paladin. Likewise, Alynblaze is also an old night elf ghost with paladin abilities, and Azshara's Eternal Champions used similar abilities as well. If these are in fact paladins rather than some similar but distinct group, it is unknown how the ancient elves became paladins, but it is believed by Velen that Elune is a Naaru. However, despite the addition of these characters in Legion, night elf paladins are still unplayable.

Racial traits make a small difference in gameplay, but for most players, these are not significant enough to make one choice better than the rest. Each race has at least one trait that paladins will find beneficial. The important thing is to develop a character who you will enjoy playing.

Draenei get a 1% higher chance to hit with all attacks and spells, and have a mana-free heal in

[Gift of the Naaru]. Dwarves enjoy a 1% increase to their Expertise when using a one- or two-handed Mace, which also makes it easier to hit enemies. The dwarves'

[Stoneform] helps with survivability by reducing incoming damage. Humans get a 1% bonus to Expertise when using Maces or Swords, and

[War Stomp] stuns nearby enemies, which is useful for interrupting spellcasting and mitigating damage. Tauren also have great

[Endurance], and benefit from a higher health pool. Blood elves can also interrupt enemies with

[Arcane Torrent]. Though this is only useful against spellcasters, it can also be used to quickly restore a small amount of mana.

Humans began the Knights of the Silver Hand, and they remain the bulk of its membership. They are proud of the paladins' contribution to the Second and Third Wars, though they are shamed at Arthas' betrayal. After such an enormous breach of trust, the paladins have resolved anew to eliminate all traces of corruption in their ranks. Many see humans as the quintessential paladins. The iconic human paladin marches into combat, cloak flowing, hammer pounding, and faith unwavering.[6]

Bows and guns are for cowards, and the human paladin disdains them. He is not proficient with any ranged weapons. However, paladins have a long history of hammer fighting, and they respect the dwarves' progress in this area. Human paladins are proficient with the dwarven battle hammer.[7]

Wildhammer Clan paladins and priests of the Holy Light may exist, but are about as rare as Ironforge druids.[8]

The few high elf paladins and priests proved invaluable in the Third War.[9]