Paladin tactics for Mists of Pandaria are presented below. Be advised that the article is significantly out of date, and that while it may contain some strategies and advice that is still relevant to the current game, much of its content may no longer be accurate.

Blessings (remember to keep one up):

Seals (remember to keep one up): 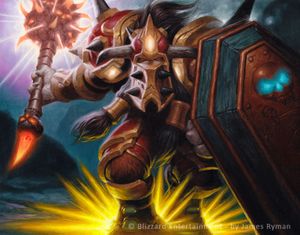 [Improved Judgement] increases the range of

[Avenger's Shield] has a range of 30 yards and is the preferred way of pulling mobs for Protection Paladins. It deals a fair share of damage and interrupts spell casting, affecting up to two additional nearby targets.

The talent Holy Shock is a 20 yard ranged ability with a 6 second timer and targets a single mob.

[Exorcism] can also be used as a ranged/pulling attack. Exorcism is usable against all targets, and will always critically hit when used against Undead or Demon targets. Don't forget that if you face a warlock or death knight in PvP, their pets are demons or Undead.

[Exorcism] can be used against hunter pets however this will not always trigger a critical hit.

[Hammer of Wrath] is also a ranged attack, though it is only usable when your opponent is at 20% health or lower.

Items: Trinkets such as [Linken's Boomerang] (a reward for quest series in Un'Goro), the engineering profession (for grenades and other ranged trinkets), by getting [Ez-Thro Dynamite] from an engineer, or items such as [Magic Candle]s. [The Decapitator] is a one-hand axe that drops off Prince Malchezaar.

[Hammer of Justice] stuns the target for a short time (3-6 seconds, depending on rank), however, it's cooldown is also long -- one minute, untalented.

[Repentance] can also be used also, though it will be canceled when damage is dealt, and it also has a one minute cooldown.

[Concentration Aura] reduces the spell push back received from damage by 35%. For Paladins with

[Spiritual Focus] the push back is eliminated all together. 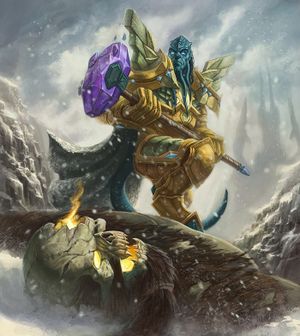 Hulstom, Servant of the Light, a draenei paladin just done with killing a flesh giant.

During the early levels, you should spec retribution for higher melee damage. Use a 2-hand weapon with good DPS, and wear mail armor (plate after level 40) with Strength and Stamina. You should also keep a shield and a fast 1-hand weapon in the bag for special situations. Be sure to get Improved Judgements at 14-5,

[The Art of War] and

[Crusader Strike] at 50. The other talents should be pretty self-explanatory (more damage is good).

Paladin soloing is dull but fairly fast. At early levels, you don't have very many buttons to press, but with a good weapon you have enough burst that things will die quickly. Pull with (at level 16 or above) Reckoning; this does a lot of damage for very little mana and is off the GCD. Judge whenever you can. That's basically it. If the mob runs, Reckoning will finish it off (since it's no longer targeting you).

[Exorcism] is useful when cast while pulling but not while the mob is hitting you, since it interrupts your melee attacks. When you have Art of War,

[Exorcism] becomes instant cast and should be used whenever possible. You'll finally get a short-cooldown attack at 50 with

[Crusader Strike], and another at 60 with

After level 20, you can kill 3-5 mobs pretty easily by using

[Consecration] on single mobs until you get

[Judgements of the Wise], since it's a big mana hog.

When fighting, always remember to keep your Aura, Blessings and Seal up all the time! You generally want

[Seal of Truth], but consider

[Blessing of Kings] and

You have a lot of options when things get dicey.

[Lay on Hands] is a full heal on a moderate timer.

[Hand of Protection] and

[Divine Shield] make you invulnerable long enough to heal up with

[Holy Light]. If these are all on cooldown, put on

[Concentration Aura] and try to get

[Holy Light] off before you die.

[Repentance] can all help incapacitate a particularly tough foe.

[Judgements of the Wise], giving you nigh-infinite mana.

[Glyph of Judgement] and

[Glyph of Exorcism] are both moderate DPS boosters. The minor glyphs worth using are

[Glyph of Blessing of Might], a nice time saver, and

[Glyph of Sense Undead], the only minor glyph that increases damage.

What stats affect my damage the most? 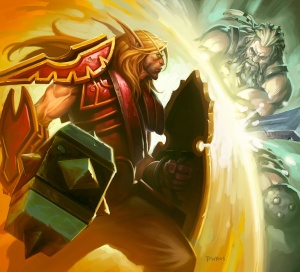 As a Retribution Paladin there are several stats that are important to your dps. These are strength/attack power (AP), hit rating 8% for PvE or 5% for PvP, and critical strike rating above 25% to keep Vengeance up. Spell damage no longer plays a major part in a Retribution Paladin's damage since patch 2.4.

Since patch 3.0.2, strength and attack power became the most important stats for Protection Paladins dps.

There is one basic stat for Holy Paladins dps: Spell Power. DPS Holy Paladins, or shockadins (not recommended for leveling) also benefit from critical strike rating and intellect.

All paladins benefit from spell power; however, only Holy Paladins should wear gear specifically with spell power on it. Protection and Retribution both possess talents (deep in each respective tree) to obtain a significant amount of spell power through a percentage of a baseline stat - Attack Power (and as a result, Strength) for Retribution, Strength for Protection. 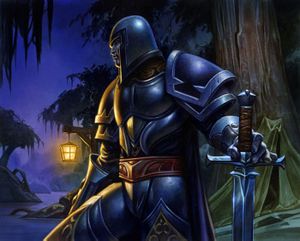 [Seal of Command] or

[Seal of Corruption]. These seals combined with a two handed weapon yield the highest DPS. Typically, a weapon with higher melee damage is preferred in weapons with near-identical weapon dps.

Protection utilizes one handed weapons with

[Seal of Corruption] or

[Seal of Vengeance] while tanking, only using

[Seal of Righteousness] if they are Seal Twisting in order to push out a bit extra threat. Tanking with Seal of Corruption/Vengeance also has the added benefit of having the damage over time component being applied to every target

[Shield of Righteousness] without a shield.

Holy utilizes one handed weapons with

[Seal of Light], or Seal of Vengeance/Corruption. Attack speed of the weapon does not affect the overall damage as most damage caused will be caused by using

[Holy Shock] offensively, as well as Judgements and

[Consecration]. In addition, the holy damage of Seal of Righteousness for each swing is inversely proportional to the attack speed. However, a faster weapon does give more proc when using Seal/Judgement of Wisdom/Light. Holy Paladins may also use Shield of Righteousness in their solo'ing/dps rotation when in melee range.

As a hybrid class you can have three roles in a party: dps, tank, or healer. Which one you play at any given time will depend on your talent spec, the gear you bring with you, and the composition of the rest of the party. Make sure you (and others) are aware of your role from the outset to avoid problems later.

See Paladin instance grouping guide for further tips. For details of different roles of paladins in group, please refer to Paladins as healers, Paladins as tanks, and Paladins as DPS.

Always make sure you activate an aura appropriate to your situation. Change as the situation calls for because it's instant and costs no mana.

[Devotion Aura]
Early on this is all you have. Mostly useful in groups after other auras become available.

[Retribution Aura]
While soloing this will be the primary aura to maintain, it works especially well on fast hitting mobs.
Available at 16th level.

[Concentration Aura]
Switch to this aura when you need to heal. This is especially important if you do not have the talent

[Spiritual Focus]. Combine it with the talent and there will be very few effects that will interrupt your healing.
Available at 22nd level.

[Resistance Aura]
Provides additional magical resistance to all party and raid members within 40 yards. Good for boss fights that use a lot of shadow attacks on the party or raid. E.g., The Black Knight (tactics)

It should be emphasized that Resistance Aura is very helpful for harder boss fights. For example, going off of the Resistance table on this site, a level 80 paladin using a resistance aura will block about 23.5% of spell damage inflicted of that magic type for a level 83 boss. If a boss hits the entire raid for 5000 damage to each person, that's 125000 damage in a 25-man. If the aura is used, that number can be brought down to 95625 damage. You would be mitigating about 29375 damage. 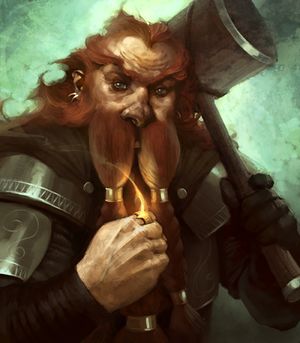 Make sure you always have a blessing active. As of Patch 4.0 all blessings have had their timers increased to 60 minutes and now buffs the entire party or raid. Remember that it is an instant cast, so even if you're in combat you can go ahead and bless yourself or others as necessary.

[Blessing of Might]
This will increase your Attack Power by 10% and MP5 by a number based on your level.

[Blessing of Kings]
Increases all your base stats (except Spirit) by 5%, as well as increasing resistances to magic by a number based on your level. This blessing is important in situations where higher health is needed, such as tanking or PvP. It also increases your DPS by providing extra strength, although the improvement is not as big as Blessing of Might. In addition, it also increases your mana pool, although the improvement is most noticeable as Holy. This does not stack with

Seals are self-buffs which boost the Paladin's power temporarily. Effectively, they add a weapon proc to their melee strikes. Additionally, Paladins can judge these seals upon an enemy which deals damage and provides a judgement effect for 20 seconds. The judgement effect can benefit the paladin as well as others who are hitting the mobs, and only one judgement effect per paladin can exist on a target. For more detailed information see Paladin#Seals. 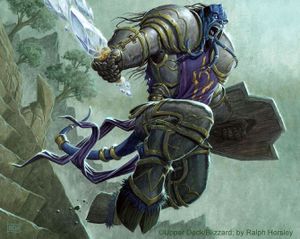 Zaistor the Vigilant, another draenei paladin.

[Seal of Righteousness]
By itself it provides X amount of additional Holy damage per hit based on weapon speed.
When judged it causes instant holy damage to the target based on Attack Power and Spell Power.
It is the initial seal for protection paladin tanks, however is replaced after obtaining

[Seal of Corruption] or

[Seal of Vengeance].
Your first seal.

[Seal of Justice]
By itself it provides a chance of stunning the target. This can only occur three times in a row on a target, as both mobs and players subject it to diminishing returns.
When judged, causes some holy damage based on Spell Power and Attack Power.
Available at level 22.

[Seal of Light]
By itself it provides a chance of returning X health per hit.

[Glyph of Seal of Light] adds 5% healing to all your spells while Seal of Light is active.
When judged, causes some holy damage based on Spell Power and Attack Power.
Available at level 30. 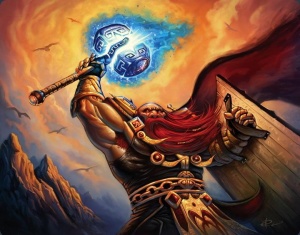 [Seal of Wisdom]
By itself it provides a chance of returning a percentage of total mana per hit.

[Glyph of Seal of Wisdom] reduces mana cost of all healing spells while Seal of Wisdom is active.
When judged, causes some holy damage based on Spell Power and Attack Power.
Available at level 38.

[Seal of Vengeance] (Alliance) and

[Seal of Blood] (Horde) and

[Seal of the Martyr] (Alliance)

Note* As of Patch 3.2, Seal of Blood has been removed.

[Judgment] causes holy damage and cannot be cast without a seal.

On the other hand, there is no good protection spec for PvP. The reason is most of the damage of protection paladins depends on reflective damage, which means you are not going to do much damage in PvP except against very stupid rogues, fury warriors or enhancement shamans. Also, the healing is not as good as Holy paladins. Protection paladins still have use for (multi-)tanking bosses in Alterac Valley, holding flag in Warsong Gulch or Eye of the Storm, or defending bases in Arathi Basin (until help arrives or the offenders kill you eventually).