For the panda-like humanoids, see pandaren. 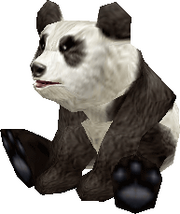 Pandas are rare creatures that have so far never been sighted in the wild. There are two types of pandas: the more bear-like giant pandas and the raccoon-like red pandas.

The pandaren are a race of panda-like humanoids.