The Pandaren April Fools was a 2002 April Fool joke that Blizzard put up on their site, posting the pandaren as the so-called "5th race" for Warcraft III: Reign of Chaos. While much of this material was later adapted into lore in later sources (The Frozen Throne, Warcraft RPG, etc.), some of it differs from the later established lore.

While the introduction of the pandaren as a race for Warcraft III was purely humorous, almost a decade later the race was added to World of Warcraft's fourth expansion, Mists of Pandaria, as a playable race. Perhaps understandably, many players also believed this to be an elaborate prank, although for many this was more desperate hope than a simple mistake. 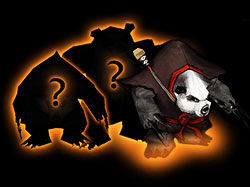 Blizzard is pleased to announce the latest addition to the Warcraft universe: the mighty Pandaren Empire. The pandaren, driven from their tranquil lands by the marauding centaurs, fight ceaselessly to find a new homeland amongst the warring civilizations of southern Kalimdor.

The Pandaren Empire, founded in ancient times, before the Great Sundering of the world, shared resources and mystic knowledge with the haughty night elves of central Kalimdor. However, as the night elves' racial obsession with the forces of magic drove them to the brink of madness, the gentle pandaren decided to sever their ties and leave the night elves behind forever. Sensing that magic would be the doom of any race that trifled with it, the pandaren clans, or shao'dins, traveled far into the treacherous lands of the south. There the pandaren established crude, but beautiful cities of stone and sturdy bambus reed. They lived in peace for many generations before the burning shadow came to engulf the world...

After the War of the Ancients and the subsequent Sundering of the world, the pandaren's surroundings became increasingly hostile. Forced to fight for food and precious land against both the early tauren and the bristling quilboar tribes, they developed into amazingly proficient warriors. Wielding thin, delicately balanced blades, the pandaren wardancers quickly established themselves as some of the deadliest swordsmen of the ancient world. With the wardancers leading their armies, the pandaren carved out a small empire for themselves in the Stonetalon region of Kalimdor's desolate Barrens. Though the fierce wardancers maintained peace throughout the pandaren lands, their relatively small population would ensure that their influence would never spread much farther than the Barrens' rocky borders.

Now that war has engulfed Kalimdor once again, the mighty pandaren have come forth to protect their sacred lands and ensure their ancient race's survival.

These mighty pandaren warriors oversee the armies of their empire and serve as feudal lords to the general population. Shodo-Pans have the ability to wield geomantic powers as well as the wardancers' shaktani blades. The stoic Shodo-Pans' greatest enemies are the cruel centaur khans of southern Kalimdor. The Pans ceaselessly work to hunt down the khans and their centaur marauders whenever they encroach upon the lands of the pandaren empire.

Despite their girth and size, pandaren wardancers are exceptionally agile. Carrying their sacred shaktani warblades, these mighty swordsmen inspire fear in all of the primitive denizens of the Barrens. Though their light bambus armor gives them only moderate protection, the wardancers' skills make them formidable opponents.

These brave warriors wield heavy bambus pikes that they can use as both melee weapons and devastating projectiles. The pikes, known as pan-spears, can be thrown great distances with startling accuracy due to their hollow bambus shafts. The pikemen, usually found supporting wardancers on the front lines of combat, are adept at intimidating enemy forces by displaying their fierce proficiency with their versatile weapons.

Much like the night elf druids, the pandaren mystics developed an affinity for the spirits of the earth. These hearty mystics developed the practice of geomancy - and learned to wield the fury of the earth by appeasing the restless elemental spirits. Many geomancers have been known to summon various types of rock and stone elementals, and great geomancers have even caused catastrophic earthquakes to swallow enemy armies.