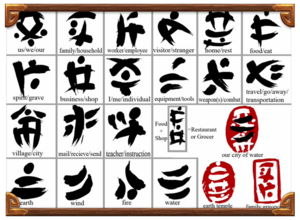 The term Pandaren can refer to two languages: the "old tongue", and the modern pandaren language, which has been adopted from the mogu and may actually be coterminous with their own language (see speculation). The latter is spoken by pandaren players in World of Warcraft, while the former can be heard in some in-game quests. 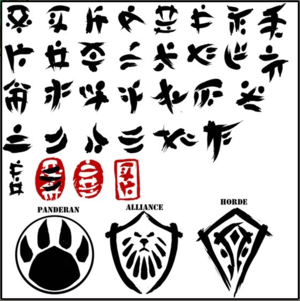 The "old tongue" is the term used for the original language of the pandaren, spoken before mogu enslavement. All writings in that language were burned after Lei Shen established the mogu empire, an act fueled by his distrust of the pandaren and their peaceful philosophy. All pandaren leaders and philosophers were executed, with the pandaren forbidden to learn to read or write (a policy later relaxed under Emperor Tsao);[1] anyone caught speaking anything but the mogu tongue was considered to be a conspirator, a charge often punished with slow, brutal death. All pandaren art was also burned along with their literature.[2][3][4] As a result of this, the old tongue has practically disappeared, displaced by Mogu.

However, despite this, the old tongue has survived to the modern age, although it is now considered a "language of emperors and scholars", with most common pandaren unable to speak or understand it. The Song of Liu Lang, an ancient pandaren song that tells the story of Liu Lang and his adventures on the back of Shen-zin Su, is sung by Lorewalker Cho at the Wanderer's Festival. Lorewalker Ruolin also sung it to pandaren children, though they could not understand any of the words.[5]

Ages later, other great pandaren scholars would be born, but the language they spoke was not truly their own:[2] this modern pandaren language is in fact the language of the mogu (or at least descended from it).

According to Vol'jin, Pandaren seems to have a half dozen words for almost everything, with nuances an outsider would never understand and which the pandaren can use to mask their true intent.[6]

Player characters speaking Pandaren in-game have their words translated into "om" (for <2-letter words) and "nom" (for >2-letter words) to non-pandaren, producing little more than "om nom nom" joke speech. Since patch 7.0.3, pandaren can now use their racial language to communicate with pandaren of the opposite faction.[7] Before, only pandaren of the same faction understood the Pandaren language, so there were effectively two Pandaren languages in the game, one for each faction.

There are several unique words and expressions used by pandaren, that may or may not represent Pandaren speech:

Pandaren naming practices are similar to those of humans: each pandaren has a given name and a surname.

Relationship between Mogu and modern Pandaren

The relationship between the languages of the pandaren and the mogu are unclear. Although it has been stated in Chronicle as well as in-game that pandaren were forced to abandon their language in favour of that of the mogu, Mists of Pandaria generally treats Pandaren and Mogu as two separate languages, rather than one. Indeed, the pandaren adventurer is unable to read ancient mogu texts in the Kun-Lai Summit, and even Lorewalker Cho takes time to translate them.[21] The mogu also do not appear to use the same Nushu-inspired glyphs as the pandaren.

It is possible that, although the pandaren did adopt Mogu during Lei Shen's rule, enough differences have appeared since then for their language to be considered separate. In real life, enslaved or otherwise subjugated populations would often adopt their rulers' language, but with the influence of their native speech, creating mixed languages known as creoles. It is possible that Pandaren at least originated as such a creole: the mogu language as spoken by pandaren, with the phonology and grammar of their "old tongue" "creeping in". The 12,000 years of separation would then presumably cement these differences, so that now pandaren can no longer understand mogu texts.

Of course, it is also possible that "Pandaren" and "Mogu" are simply two names for the same language, and the only reason Lorewalker Cho was unable to read mogu texts right away was their age, with the modern pandaren and mogu still capable of understanding one another. The fact that the pandaren and the mogu still use the same naming customs (Mandarin-inspired first names and descriptive surnames) lends credence to that theory, especially since other Pandarian races, such as the jinyu, have completely different names.