Were you looking for general lore about brewmasters or Warcraft III unit? 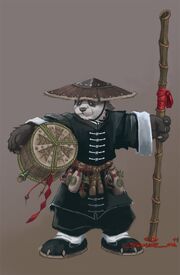 Hailing from the secretive Pandaren Empire, the mighty brewmasters travel the world in search of exotic ales and the finest brewed spirits. These affable warriors rarely seek out danger or trouble, preferring instead to spend their time concocting new and tasty beverages for any brave enough to imbibe them. However, if attacked, the laughing brewmasters bring all of their pandaren agility and ferocity to bear! They even bring their beer to war! They are peerless warriors and world class drinkers all in one![1]

A rare few pandaren walk outside of their culture's normal ways. Brewmasters are those pandaren given to a fondness for drink. Rather than them being relegated to some outcast place in society, however, pandaren highly regard those who show such a propensity. These pandaren, like all their kind, master a craft: theirs is the creation of ales, wines and other spirits.

Yet the term "spirits" is not used facetiously among these folk, for those who would become brewmasters learn which plants, berries, and fungi harbor the most powerful spirits. They harvest these spirits and awaken them, allowing the one fortunate enough to drink one of these Master Brews to actually see and commune with the spirit.

A warrior Hero, the brewmasters of Pandaria have emerged from the bamboo forests of their ancestors to bring their unique fighting style (and robust ales) to the highest bidder.[2]

Appearance in The Frozen Throne campaigns

The Japanese and the Chinese Brewmasters

In the fourth mission of the Sentinels campaign a pandaren was in the Pandaren Brewing area in southwest corner of the map. He gave Maiev Shadowsong a Slipper of Agility +3, before closing up his shop.

Chen Stormstout is the most prominently featured Brewmaster and is present throughout the bonus campaign, albeit only if you complete an optional quest to recruit him.

Two brewmasters appear in the Blood Elf campaign. In the secret mission, one shows up in the final wave to try to stop the blood elves from escaping through the portal. The second one is a secret character. To get the Brewmaster, however, the player must survive all the waves of attackers on the tower defense style secret level, including defeating the alliance allied Pandaren. If successful, they'll control not only Kael & Vashj during the next mission, but also a random-named brewmaster.

The brewmasters learn their strange, drunken wardance from these spirits. Brewmasters are the only pandaren who are exempt from the strictures regarding the ability to create and destroy — in all things, the brewmasters are too busy listening to the spirits that swirl about within their heads to care what their peers think.[4]