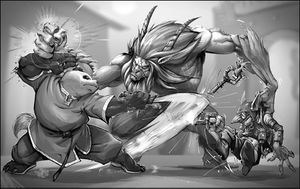 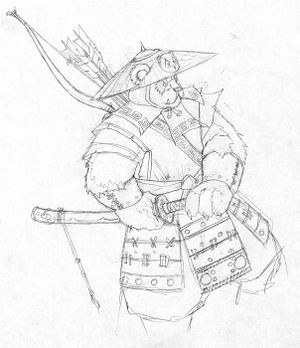 Pandaren wardancers are a pandaren warrior variant. Pandaren are by all accounts graceful and skilled warriors. Their wardancers epitomize the pandaren art of warfare — and for the wardancers, battle is indeed an art. Their title does not come coincidentally. Their movements are precise and fluid; they appear to dance through a battlefield, their blades flashing silver, blood spraying into the air, and bodies toppling as they move. While wardancers are deadly, they, like all pandaren, are inherently peaceful. The greatest hope of the wardancer is to not have to use his skills. However, in Azeroth’s current age, the wardancers’ skills are needed more than ever. Wardancers move out to confront demons, undead and other horrid creatures, their hearts lightened by the thought that, through their battles, other creatures will live — perhaps, other creatures will never know battle.[1]

Resplendent in their elaborate bambus armor and dangerous with their shaktani warblades to hand, the wardancers are the very epitome of the pandaren outlook on the world. To the pandaren, each individual has an art, an art that he or she should spend his or her life perfecting. For the wardancers, this art is the art of violence and war. Wardancers are not warlike, however; they are perhaps the world's only artists who regret every opportunity they are given to practice their art. Nevertheless, they save their regret for purifications undertaken after combat. In the midst of battle, few sights can equal that of a pandaren wardancer, performing a lethal dance of steel and blood, moving to the sacred song that all wardancers are taught to hear within the din of violence.

Wardancers are at the forefront of any pandaren war effort, cutting a swathe through the enemy. Though they are trained to use effective group tactics during their careers as pikemen, wardancers do not operate together. Instead, each wardancer operates alone on the battlefield, supported by those pikemen over whom he is both captain and mentor. He dances the shaktani dance alone and with grim determination. Wardancers are backed up by pandaren who throw pan-spears at the enemy, while guarding the flanks of their champion pikemen.[2] Wielding thin, delicately balanced blades, the pandaren wardancers quickly established themselves as some of the deadliest swordsmen of the world.[3]

The iconic pandaren wardancer wears a long, black tunic with gold buttons and gold trim. He wields a delicate shaktani sword in one hand, and his other hand is empty. He balances on the balls of his feet, eyes watching, and when the time is right, he is a spinning, leaping weapon of destruction.[1]

They can speak Common, Dwarven, and Pandaren.[4]