Shrouded in fog since the world was sundered more than ten thousand years ago, the ancient realm of Pandaria has remained unspoiled by war. Its lush forests and cloud-ringed mountains are home to a complex ecosystem of indigenous races and exotic creatures. It is the homeland of the enigmatic pandaren, a race that celebrates life to the fullest even while under siege by an ancient menace.

The new continent reveals itself to a broken world just as the Alliance and Horde are spiraling ever closer to a war that will consume all of Azeroth. Will the mists of Pandaria part to reveal the world's salvation? Or will the battle to control this rich and breathtaking new land push the two mighty factions over the brink of war and into total annihilation?[2]

Pandaria ([pɛnˈdɑɹiə], pronunciation with pandaren accent) is the homeland of the pandaren and birthplace of their ancient empire. Located in the southern part of Azeroth,[1] Pandaria was shrouded by a magical mist by its last emperor after the Great Sundering ten thousand years ago, and thus disappeared into myth and legend. Only those pandaren who left their homeland on the back of the great turtle Shen-zin Su, including the renowned pandaren brewmasters,[3] have been seen outside of their homeland since; some even came to the aid of the other races during the Third War.

Pandaria is featured in the World of Warcraft expansion Mists of Pandaria.

During the ordering of Azeroth, the titan Aman'Thul destroyed the Old God Y'Shaarj by ripping it out from the crust of the planet. Its remains fell back on the southern portion of the original Kalimdor supercontinent, which would one day become known as Pandaria. After the war, the titan-forged servants led by Keeper Ra retrieved the remains of the Old God, and found the Heart of Y'Shaarj which they sealed within a vault,[4] guarded by the titanic watcher Norushen.

Long ago, as the titanic watcher Keeper Freya set out to populate the world with life, she placed one of the first seeds in Pandaria. From it grew Fu Zan, the first, and all of Pandaria's forests descended from it. Before populating the rest of Azeroth, Freya fashioned a walking stick for her travels from one of Fu Zan's branches. Eventually Freya passed her staff to the Jade Serpent, Yu'lon, who later gave it to a uniquely clever hozen. The Monkey King, as he was called, hung his most prized possessions from the staff, which he carries with him to this day.[5]

The Thunder King's rise and the mogu empire

Over time, the mogu fell under the influence of the Curse of Flesh and became obsessed with their mission of bringing peace and order, to the point where they came to believe that all other races must bow to their order. This led to the tumultuous Age of a Hundred Kings. During this time, a warrior named Lei Shen decided to take the future of Pandaria into his own hands. He traveled to the Isle of Thunder and brutally defeated Ra, ripping out and eating his heart, gaining Ra's power over wind and storm. Crowned the Thunder King, none could stand against Lei Shen's mission to bring peace and order to Pandaria through tyranny. His construction of the Serpent's Spine to separate the dreaded mantid from the rest of Pandaria's races is often cited as his greatest achievement. However, the mantid would adapt to this, swarming the Serpent's Spine every 100 years so that the weak would die and only the strong would return. Being a long-lived race, they would grow stronger with each generation. Lei Shen eventually died of old age, leaving weaker mogu emperors to rule in his stead.

The races of Pandaria continued to struggle under the iron fist of the mogu. The pandaren slaves would eventually become inspired by the words and actions of Kang, The Fist of First Dawn. Rallying the hozen, jinyu, and grummles to their side, the new pandaren monks led a revolution. The mogu were defeated and their empire crumbled. They counterattacked years later with their allies, the Zandalari, during the Zandalari Troll Wars. Thanks to the newly formed Order of the Cloud Serpent, the Zandalari were repelled and the mogu clans were scattered, securing the future of the pandaren empire.

The empire prospered until the time of Emperor Shaohao, who later became known as the Last Emperor. Wishing to save his people from the forthcoming War of the Ancients, he conquered his own vices by burying the six prime sha of doubt, despair, violence, anger, hatred, and fear within the land. With the help of the August Celestials, he became one with the land and isolated it from the rest of the world to make it safe. However, what Shaohao did not realize was that this was actually the work of the Sha of Pride using Shaohao's power and arrogance to cloak the land in magic mists. Shaohao believed the pandaren were better than the rest of the world and that they could solve their own problems. While his actions saved Pandaria from the Great Sundering, he doomed Pandaria to a future of stagnation.

The mists parted because of the Cataclysm,[6] when tensions between the Alliance and Horde were at their highest. In his lust for power, Warchief Garrosh Hellscream led the Horde to Pandaria's shores to gain its spoils for himself, while High King Varian Wrynn led the Alliance to protect it from Hellscream's mad quest for power. While the locals were initially wary of the outsiders whose presence allowed the sha to awaken in full force, they soon came to see the outisders as allies in the campaigns against the sha, mantid, and the newly revived Thunder King.

Garrosh Hellscream continually attempted to abuse Pandaria's gifts for his own personal power, including the Divine Bell and the Heart of Y'Shaarj. Following his desecration of the Vale of Eternal Blossoms, he and his "True Horde" were defeated during the Siege of Orgrimmar. The spirit of Emperor Shaohao then planted a magical tree in the center of the Vale, providing hope that the damage done to Pandaria will eventually heal. The August Celestials claimed that they will work with the mortals to heal the land. By the time of the Iron Horde's invasion of Azeroth, the Vale has been cleansed.[7]

During the Burning Legion's third invasion of Azeroth, many temples across Pandaria fell under siege from the Legion in what seemed targeted attacks. The Broken Temple sent aid where they could to help repel the invasion.[citation needed]

Taken from the section on the pandaren from the website for Mists of Pandaria:

Denizens of a wondrous and fertile land, the pandaren once labored under the oppressive thumb of a monstrous race of ancient warlords known as the Mogu. Through tenacity, diplomacy, and a unique form of unarmed combat, the pandaren staged a successful revolution that deposed the Mogu and established a pandaren empire that would prosper for thousands of years.

During the bleak days that preceded the sundering of the world, when demons flooded onto Azeroth and threw the entirety of the mortal realm into jeopardy, the last emperor of the pandaren discovered a way to protect his land from the devastation. His deal with fate shrouded his land within an impenetrable mist for ten thousand years, but the nature of his transaction has left Pandaria haunted ever since... 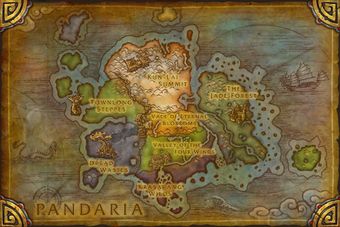 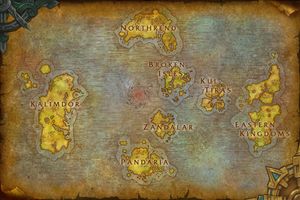 Players will get to Pandaria via new quests from Orgrimmar and Stormwind. The quests are short and sweet to make sure players can get into the new continent as fast as possible.[1] Initially, adventurers venture beyond the mists via gunships stationed in capital cities at level 85. There will be no conventional means of accessing Pandaria later such as ships or zeppelins, and will be linked to the rest of the world by portals to the Jade Forest.

Pandaria is the main setting of the fourth expansion.

Some of the zones are a bit larger than the zones introduced in Cataclysm, for example the Jade Forest is roughly half-again larger than Twilight Highlands. The regions vary in mood, for example some of the areas are lush and peaceful, while others are much darker and menacing in tone. The entire continent is influenced by various real life Eastern Asian cultures. 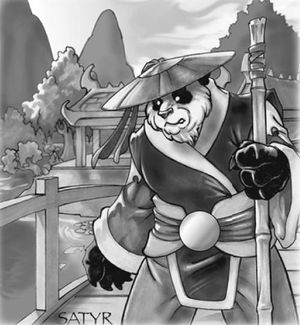 Pandaria is a legendary place of bamboo forests and the mysterious pandaren of the pandaren empire. The pandaren empire was founded before the Great Sundering of the world, and is believed to be just as old as the kaldorei civilization. It shared and traded resources, goods, ideas and mystic knowledge with the haughty night elves of central Kalimdor in the years before the War of the Ancients. As the night elves' obsession with the forces of magic drove them to the brink of madness, the gentle pandaren severed ties, withdrew and closed their borders,[8] and left the night elves behind forever. The pandaren clans, or shao'dins, traveled far across the seas and established crude but beautiful cities of stone and sturdy bambus reed on an island they named Pandaria.[9] In time they built a new empire on the island.

For ten millennia, the world had forgotten pandaren. Shortly after the Third War, though, a few reappeared — perhaps roused from their isolation by the Burning Legion, whose catastrophic coming shook the world.[10] A splinter group of pandaren arrived on Kalimdor in the aftermath of the Third War and has established a settlement in the Stonetalon Mountains of Kalimdor,[11][12] but the location remains as secret as that of their island homeland, even after the ability of adventurers to explore previously unknown areas since the Cataclysm.

Pandaria is apparently known for its gems (which are apparently magical). The red dragons believed that three crushed gems from Pandaria were one of the components needed to rejuvenate the Sunwell.[13]

One of the classic game boards in Hearthstone is themed around Pandaria.

Additionally, the Pandaria card back was rewarded for achieving Rank 20 in Ranked Season 1, which took place during April 2014. The flavor text reads: "Hearthstone is a very popular game in Pandaria. Official card game of the Shado-Pan!"