This article is about the mantid champions. For the boss encounter, see Paragons of the Klaxxi. For the short stories collection, see World of Warcraft: Paragons. For the Paragon reputation level, see emissary system. 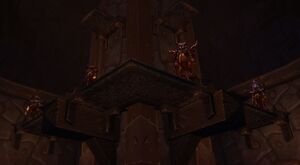 Paragons of the Klaxxi in the Siege of Orgrimmar

Paragons are mantid champions from past eras who were preserved in amber at the height of their strength and buried all over the Dread Wastes. Legendary heroes of the mantid, they are preserved in case of a great crisis.[1] Some of them are war masters, others are ingenious alchemists or master assassins. After being chosen, the Klaxxi are usually responsible for giving paragons their second names.[1]

Paragons are encased in empowered amber shells by a skilled ambersmith of the paragon's choosing. After putting the paragon to sleep, the ambersmith is immediately killed, in order to keep the location of the paragon a secret. It requires the power of the entire Klaxxi council to locate paragons, preventing outsiders or lone Klaxxi'va from interfering with them. Once encased, paragons will be left to sleep until there is need of their help, and can awaken from many thousands of years of sleep without incident. However, the power of the amber is finite, and the preserved subject runs the risk of death if not released from stasis before the power of the amber is depleted.[1]

Being put to sleep is painful, and feels like dying. Being awakened is also painful, and leaves the paragon extremely weak and in dire need of nourishment. It is speculated among the mantid that the process of reviving a paragon from his amber slumber is akin to an empress bringing her swarmborn into the world, and awakened paragons do seem to feel a special bond with the one who rouses them from their sleep. Calling them their "Wakener", paragons can instinctively recognize the one who awakened them. The process of putting paragons to sleep in amber and the equipment used for it was invented by the first paragon, Korven the Prime.[1]

Becoming a paragon brings with it the right to ask questions and expect answers. Paragons display an awareness of the nature of the cycle and the swarm far beyond that of other mantid, including a far less reverential attitude toward the current empress. Through the Klaxxi, paragons are aware of their true purpose - not merely to serve the empress, but to preserve the cycle.[1]

When the player first arrives in the Dread Wastes, they stumble upon the paragon

Kil'ruk the Wind-Reaver and awaken him. Kil'ruk then introduces the player to the Klaxxi council, who allow the player to continue waking up paragons to help build their forces. These paragons become daily quest givers, so as they're waking them up the player is also unlocking more dailies.[2]

With the discovery of the Heart of Y'Shaarj by Garrosh Hellscream, the Klaxxi allied themselves with the Warchief and his Kor'kron. The paragons were given their own chamber within the Underhold, ready to stand against anyone who dared enter Garrosh's Inner Sanctum, where the revived heart was moved. They were eventually killed by the same adventurers with whom they had allied in Pandaria.

After Grand Empress Shek'zara pledged her people to the Old God N'Zoth, she began a new swarm to conquer Pandaria in his name. The Klaxxi apparently heard a paragon just on the other side of the Serpent's Spine at the Five Sisters in the Vale of Eternal Blossoms and saw fit to awaken them. Four Klaxxi Wakeners attempted to do so but were killed by adventurers opposing the swarm, which caused the death of the paragon as well.