Paragons of the Klaxxi is the thirteenth and penultimate boss encounter of Siege of Orgrimmar.

The nine surviving Klaxxi'va Paragons are ancient champions of the mantid who fought alongside the Wakener against the madness of Empress Shek'zeer. But the paragons, as do all mantid, hold a far deeper loyalty. When Garrosh unearthed the heart of Y'Shaarj, the paragons followed the whispers of their ancient creator to the iron halls beneath Orgrimmar.

After mopping up the August Celestials on the Timeless Isle and “freeing” the Fallen Golden Lotus Protectors from their eternal torment, our intrepid heroes soon come upon the Klaxxi Paragons. Go figure. In any case, players who have achieved Exalted with the Klaxxi faction and paid close attention during the tour of their sacred underground chamber probably saw this one coming.[1] 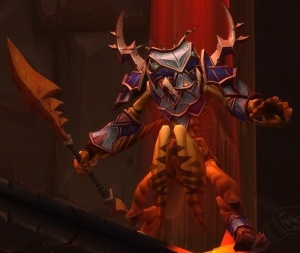 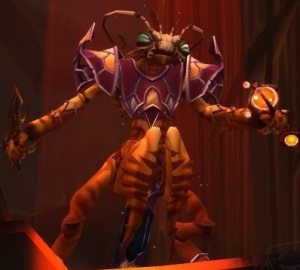 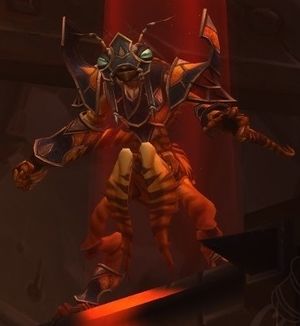 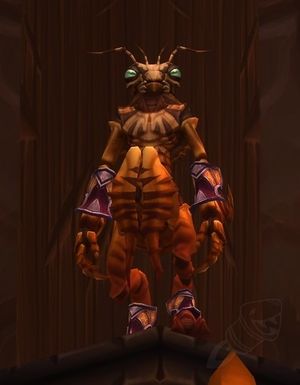 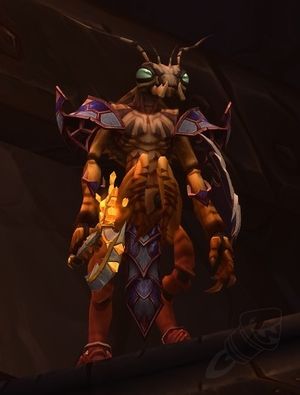 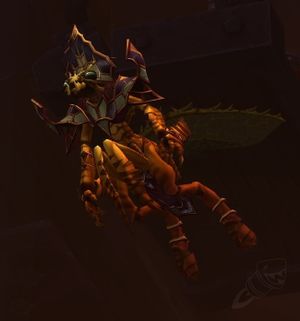 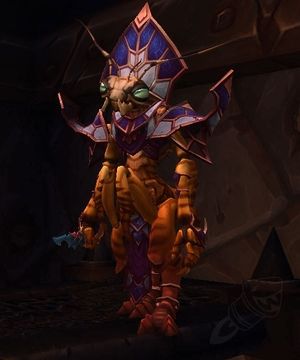 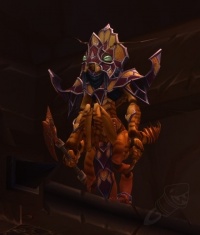 Kaz'tik the Manipulator uses two primary abilities: Sonic Projection/Mesmerize. In addition, Kaz'tik will summon his Hungry Kunchongs when he joins the fight. 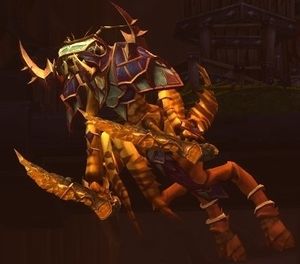 Over the course of the fight, you will have to fight nine paragons, three at a time. Each time a paragon is killed, a new one will show up to take his place. Whenever this happens, all active paragons will be healed to full health, so don't bother with cleaving, multidotting, or AoE attacks.

The first three paragons will be:

As the paragons are killed, they will be replaced in this order:

On the pull, have one tank pick up Skeer and the other tank pick up Rik'kal. Hisek cannot be tanked and should be left in the center of the room.

The raid will want to either kill Skeer first and Rik'kal second, or vice versa. This depends on the Rik'kal tank's ability and confidence to let Injection fall off via active mitigation (it is not possible for the Skeer and Rik'kal tanks to taunt-switch due to debuffs applied by one that amplify the other's attacks). If the Rik'kal tank can cause Injection to fall off, kill Skeer first and Rik'kal second, otherwise kill Rik'kal first and Skeer second. While Skeer is up, DPS will need to take out the blood creatures as a top priority, and the tank on the kill target will need to kite his boss away from the bloods. Hisek will meanwhile be periodically casting Aim, which requires raid members to stand in a line between Hisek and the Aim target to split the damage.

Once the first of Skeer or Rik'kal is defeated, Ka'roz will join the fight. The raid will need to spread out to avoid Flash/Whirling and dodge the amber pools. Ka'roz is generally not problematic and will be kept alive for a long time.

Once both Skeer and Rik'kal have been taken out, Korven will join the fight. Due to his Encase in Amber ability, Korven should be taken out immediately.

[Time Warp] should be used to break the amber that Korven will cast on himself at 50% and to then kill Korven because he can cast it on himself again. The Korven tank needs to face him away, and may need the other tank to taunt Korven if the Shield Bash/Vicious Assault combination is problematic.

Iyyokuk will join the fight once Korven is dead. Raid members affected by Insane Corruption: Fiery Edge must run away from the raid and from each other, and the rest of the raid must avoid the fiery lines. Healers must keep the raid above 25%, otherwise Diminish will one-shot people under 25%. However, the raid will be killing Hisek at this point, as his Aim damage will now be dangerously high.

Once Hisek dies, Xaril will join the raid. Kill him immediately. Anyone with the Blue catalyst should find a raid member to stack on who doesn't have the Blue catalyst. The raid will need to react accordingly to the catalysts when Toxic Injection is cast: spread from red, blue will find a non-blue friend to stack on, and yellow will need to place the void zones away from the raid. Xaril should only get one Toxic Injection off before he dies. The Xaril tank will need to drop Caustic Blood if it nears 10 stacks, either through active mitigation (preferred) or via a tank swap.

Kaz'tik will land next, and should also be immediately killed. Raid members should not stand anywhere near the Kunchongs, and ranged must immediately switch to the designated Kunchong whenever Mesmerize is cast. If a Kunchong becomes Mature, have a tank pick it up, and DPS should switch to it straight away. Players must make sure that other players are not in a line between them and the boss due to Sonic Projection.

Kil'ruk will be the last to land, and the encounter will be basically won at this point if the raid is ahead of the enrage timer; Death from Above is easily avoidable if the raid is spread out, and the Gouge/Mutilate combo simply requires tank and healer preparation and co-ordination. However, the tank previously on Xaril must not pick Kil'ruk up if he still has his Xaril stacks on him, and should always leave Kil'ruk to his co-tank. The raid should first kill Iyyokuk to reduce raid damage, then Ka'roz due to him being active for nearly the entire fight (and having a large damage increase by this point), then Kil'ruk last.

Each Paragon will, when defeated, grant a role-specific buff to the first person of the correct role that interacts with the Paragon's corpse. These buffs should be used, as their use will make the encounter easier. Only one player may pick up any one Paragon's buff, and a player that has already picked up a Paragon buff may not pick up another.

The buffs granted by each Paragon are ordered in the recommended kill order above, and are as follows:

Achievement: Now We are the Paragon

[Now We are the Paragon] is earned individually and simply requires players to pick up three separate Paragon buffs. Since a player can only pick up one Paragon buff per kill, earning this achievement will take a minimum of three raid lockouts.

Intro
Kil'ruk the Wind-Reaver yells: Look, brothers! The Wakener is here!
Rik'kal the Dissector yells: They made it this far? I told you the others needed some microsonic genetic alterations!
Iyyokuk the Lucid yells: How illogical, did they not take your warning Kil'ruk?
Xaril the Poisoned Mind yells: We Mantid serve a power far greater than they or their gods.
Kaz'tik the Manipulator yells: It matters not. The Old One will not suffer their intrusion.
Korven the Prime yells: We have endured the Usurpers, their children, the loss of the Old One, and soon... you.
Ka'roz the Locust yells: We will slay you all as easily as we slew the pandaren of old!
Skeer the Bloodseeker yells: And then the Old One will remake this world for the Mantid!
Hisek the Swarmkeeper yells: Come, children of the Titans, you face the Paragons.

Killing a player
Another kill, another trophy!

Wipe
Hmmm, Dead already?! I wonder if a session of micro-sonic deep-gene probing can reanimate them...

Death
Perhaps I could have used... some enhancements... of my own...

Aggro
I will drink your blood!

Killing a player
Another notch for my blade.

Bloodletting
Feast on the blood of our enemies!

Wipe
Look how they fall, like so many blades of grass in the wind.

Aggro
You move too slowly, how does your kind catch any prey?

Wipe
Much too slow.

Death
Curse this chitinous shell, I was not fast enough!

Aggro
You now face the Prime. Bow down to your superior!

Killing a player
The Usurpers have abandoned you.

Encase in Amber
The Old One grants us strength.

Death
Return me to the amber...

Unused quote
The amber protects us.

Aggro
Chaos is order unrecognized by a lesser mind!

Killing a player
I predicted that to be a likely outcome.

Wipe
So easily solved, you're not so complicated after all!

Aggro
Have you come to try my new concoctions, Wakener? I assure you, these are nothing like you've tasted before.

Killing a player
My alchemy is supreme!

Wipe
There is nothing the proper mixture can't handle.

Killing a player
A fitting meal for my children.

Devour
Zor'lok wasn't the only one with a strong voice!

Unused quote
Your mind has grown weak since we last met.

Aggro
I will carry you one last time, Wakener... to your doom.

Killing a player
Watch how I soar!

Death from Above
I am a leaf on the wind!

Wipe
I did warn you, Wakener.

Paragons of the Klaxxi 25 Heroic