The remains of the Park after the Cataclysm.

The Park before its destruction. 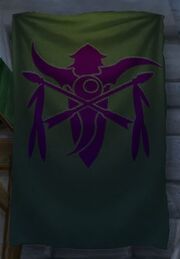 One of the banners marking the entrance to the Park

The Park used to be the district located in the western corner of Stormwind City. It was once a place devoted to leisure activities for Stormwind's populace until it became a refuge for visiting night elves, who found the comforting presence of nature a welcome respite from the vast stone thoroughfares of Stormwind proper. It was the only place in the Eastern Kingdoms where druid trainers resided. The night elves created a Moonwell in the center of the park square.

To get to the Park, one would have headed southwest from Cathedral Square or northwest from the Mage Quarter.

During the invasion of Outland, Ros'eleth tried to send olemba seeds to the park.[1]

The Park was destroyed by Deathwing's visit to Stormwind, during the Cataclysm. When he attacked the city, the druid trainer Sheldras Moontree, priest trainer Nara Meideros, and Argos Nightwhisper were the only ones known to escape alive, with the rest unaccounted for. They relocated down to Stormwind Harbor. The Old Barracks appeared to be all that remained of the Park, and before patch 7.0.3, the subzone name was displayed as "The Old Barracks" throughout the entire former Park. Lion's Rest was finally built on its ruins.

The Park...?
It's in ruins. Haven't you heard? The great dragon Deathwing soared over Stormwind and destroyed it in passing.
Not sure why he didn't level everything, honestly, but we all thank the Light he didn't.