Parqual Fintallas is a Forsaken located in the Apothecarium in the Undercity.

Before the Plague took him, Parqual was a great human historian.[3] He'd known all there was to know about Lordaeron. He lived with his wife Mina and daughter Philia in their modest but comfortable chambers in Capital City. Sometimes, when Parqual was buried deep in tomes, Mina would send Philia to get him supper. When Philia got older, she would assist him by browsing in the library. Once Parqual became an undead, he was unsure what happened to his family, although he knew that his daughter should still be alive.[2] One of few remnants of Parqual's old life was his daughter's teddy bear Brownie, which she had left behind in Lordaeron when she went to visit Stormwind.[4]

As the Forsaken were strongly discouraged from revisiting their previous life, Parqual tried to smuggle books into his former lodgings, only to get caught and have his tomes confiscated. Over the years, he used the adventurers of the Horde to sneak his books into the Undercity. The establishment of the Desolate Council by Parqual's friend Vellcinda Benton gave him a sense of camaraderie because not everyone was content with the ways of the Forsaken culture. He believed that Sylvanas should stop forcing them to live again if they did not wish to do so, as well as allow them to embrace their former life.[2] As a member of the Council, he attended the ceremony for the Forsaken who experienced their Last Deaths. He spoke about a female warrior who died to a fel reaver.[1]

Parqual later participated in a meeting with Sylvanas. He wondered whether she ever took her armor off and listened to the rules of the Gathering that would take place in the Arathi Highlands. He immediately thought of his daughter Philia and asked Sylvanas if the Forsaken could exchange gifts with their relatives and friends at the Gathering. After Elsie closed the meeting, Parqual briefly spoke with her about the upcoming meeting and her husband Wyll.[5]

The day before the Gathering, Parqual met with Elsie at Galen's Fall. He was very excited to meet his daughter, having brought Brownie Bear with him to present to Philia. They noticed Annie Lansing selling scarves and sachets and he went to take one.[4] On the meeting day, overjoyed, he and his daughter reunited and even held hands.[6] As they discussed their favorite topic, history, he told Philia that this was likely the only meeting they would ever have, something which Philia refused to accept. This prompted Parqual to go to Alonsus Faol's assistant, whom he had recognized as Calia Menethil, and ask her to assist them in defecting to the Alliance forces at Stromgarde Keep.[7] Parqual was killed by Sylvanas' dark rangers as he was running toward Stromgarde.[8] He was buried by his daughter and the rest of the human attendees that lost friends and family during the bloodshed.

It's always nice when someone wishes to speak to me. How are things with you, <class>? 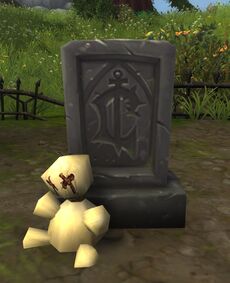 Parqual's tombstone in the Forsaken graveyard.

Parqual's tombstone at the Forsaken graveyard in the Arathi Highlands carries the epitaph:


Always In My Heart

Philia's toy Brownie Bear sits next to the headstone.